Do you have the moxie to learn a little 20s gangster slang? They were called the Roaring 20s because the Jazz Age was a fast time when juice joints were filled with molls and gold diggers in glad rags. So quit lollygagging and get started talking like a 20s gangster. Whether you're planning a flapper party, want to get more out of old gangster movies, or are just up for a laugh, 1920s slang will make you the niftiest sheik or sheba at the speakeasy. 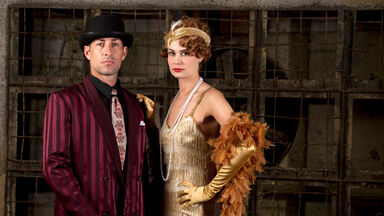 Gangster Slang of the 1920s

The gangster slang of the 20s, like the slang of any generation, was conceived in the hives of counter-culture. It wasn't so much a code to keep the police in the dark, as many movies and legends would have you believe, but a special code among those who wanted to appear as insiders. Some of the most popular ganger slang words of the 20s included:

During the 1920s, gangsters and others used a lot of slang words to describe police, jail and other realities of law enforcement. From enforcing prohibition to keeping up with gangsters, coppers sure had their hands full during this decade!

Not all slang of the 1920s tied directly to gangsters and law enforcement. Discover some of the everyday slang, such as slang words for money, made popular during the Jazz Age.

1920s Slang for Cars and Other Vehicles

Cars and other vehicles were referred to by a number of slang terms during the 20s.

Women were referred to by a number of slang terms during the roaring twenties, both within gangster culture and other aspects of society.

In the 20s, no one was more counterculture than gangsters. Gangsters were off-color, played by their own rules and didn't give a hoot about what anyone thought of them (everything your parents didn't want you to be).

Even though everybody knows that 20s mobsters often acted like monsters, there's something charming about the seedy underbelly of the Jazz Age. The slang of that time is infused with nostalgia, that thing that gives people the notion of a better time.

Politics of the Day

When one hears the slang of times long gone, it's easy to forget that alcohol was illegal and unsafe, that corruption in government ran rampant and that minorities and immigrants were more marginalized than ever.

What seemed dirty or off-color almost a hundred years ago seems rather tame by today's standards. Using the slang of yore can add character and charm to your dialect and make the obscene less so.

Whether you’re hosting a 1920s themed party or if you’re just interested in the language of the roaring 20s, these terms provide an interesting glimpse of a decade gone by.

If you’ve enjoyed learning some gangster slang from the 1920s, don’t stop there. The history of American slang words is fascinating. Take the time to explore slang from other eras. Whether you focus on decades long in the past or if you’re more interested in modern slang, there’s always something new to learn when you start studying slang. The more you learn, the more you’ll know about how slang affects the English language.