Have you ever wondered what the term snowbirds or vibin meant? What about jit? Well, if you are confused by Florida slang, we'll help you clear it up. Explore common slang terms used in Florida. 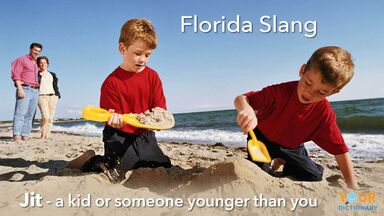 Every state has its own way to say pal or homie. In southern Florida, they use the term acere to mean friend. It’s a common Cuban term.

Another Southern Florida slang term, "bih" is like a noun; it means person, place or thing. So, it’s quite a versatile Floridian slang term.

Example: What’s wrong with that bih over there?

In slang terms, bussin is a good thing. Bussin or buss is a good way to tell someone food was good or delicious.

Example: Let’s go there again; that burrito place was bussin.

Rather than the name of someone, dale means "bye" or "to hurry up" to a Floridian. This is a term you’ll mostly find in Miami with Cuban roots.

Example: Come on, dale. We've got to get home.

Florida is full of pools. Therefore, it only makes sense that you have a "Florida bath" when you jump in the pool rather than taking a shower. You’re still getting the dirt off right!

Example: I don’t need to shower, Mom; I already had a Florida bath.

While this Floridian slang term might seem fabulous, it’s actually derogatory. Floridabulous is a slang term dedicated to the weird, bizarre and downright inexplicable actions or events that happen to or by Floridians.

Example: Oh, man! I heard about that. It was Floridabulous.

A "Florida Happy Meal" is not something you would buy a child. Rather it’s more of an adult purchase consisting of beer, cigarettes and lottery tickets.

Example: She ran up to the store to get a Florida Happy Meal.

"Florida Man" is a derogatory slang term that became popular in 2013 after a meme was created about a person from Florida that ate a man’s face. Shortly after that, this term sprung up to describe bizarre or idiotic Floridian behavior.

Example: Did you see that headline about the guy being arrested for sticking chicken nuggets up his brother's nose? That was a Flordia Man for sure.

Gator is slang for an alligator in Florida. It makes sense they shorten the word since they have a lot of these creatures.

Example: Did you see that gator?

As far as Florida slang goes, hundid is pretty easy to guess what it means. It stands for a hundred.

Example: Did you see all those bills? That guy was rolling in hundids.

Florida is a wet state. Not only are they surrounded by oceans, but they get their fair amount of rain. The slang term, "it’ll pass" refers to the short rain showers they experience.

Example: Don’t worry; it’ll pass, then we can go to the park.

Jit is a cute little term Floridian’s use to refer to someone younger than them. Typically, it’s used for a kid.

Example: The jit has a lot of gall to hit on my sister.

Due to their unique mating habits, March flies in Florida are affectionately called "love bugs." While they aren’t particularly harmful, they are annoying when they infest Florida.

Example: These love bugs are everywhere.

Florida might not have a lot of mosquitoes, but they have something a bit worse. "No see ums" is the term used to describe small blood-sucking flies irritating Florida’s population.

Example: I’m trying to get rid of those no see ums.

Example: Oye, how you doing?

"Pub sub" is a slang term to describe subs from a Publix grocery store. These hot sellers are easy for anyone to pick up and eat.

Example: I didn’t have time, so I grabbed a Pub sub.

Florida is warm. Therefore, it should come as no surprise that older adults travel from their winter homes around Thanksgiving to bask in the Florida sun until about April. These winter travelers are called snowbirds.

Example: That entire trailer park is full of snowbirds.

When it comes to the phrase "The Florijority," think elections. This term demonstrates how Florida typically has pull during presidential election time.

Example: That election might have gone the other way if it weren’t for The Florijority.

When it comes to South Florida, "vibin" is to just chill. Think of vibin as a good way to spend the day out in the Florida sun.

Example: We are just vibin today.

Example: I’m never going to be late again. I’m so tired of being parked in Goofy.

If you’ve ever drunk a bit too much to stand properly, then you have an understanding of what "wicked up" means. Basically, you drank so much you weren’t able to talk or walk right.

Example: Man, you were wicked up last night. I had to basically carry you to the house.

Learning slang from around the globe can be a good time because everyone says things a bit differently and has their own unique words. Now that you’ve explored some of the Florida slang words, you might want to check out the American slang dictionary. It’s a great pastime if you are just vibin. Or, you might prefer to learn more about Florida with some fun Florida facts.