Are you looking to spice up your vocabulary with a bit of Welsh slang? Explore these 29 tidy terms, complete with definitions and example sentences. 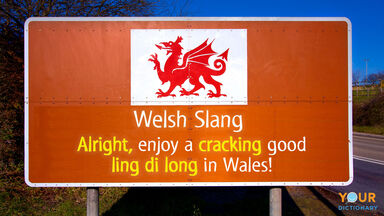 Explore some frequently used Welsh slang words from the beginning portion of the alphabet. Work these tidy terms into your vocabulary the next time you're in Wales.

Welsh Slang Words Starting With H and Beyond

Keep going further in the alphabet and you'll discover even more banging slang terms that'll help you fit in when your adventures take you to Wales.

Now that you know some Welsh slang, take the time to get familiar with some other common U.K. expressions. From there, take a deeper dive into more than 100 brilliant British slang terms and definitions of each term. Then, you might want to explore some Scottish slang.