Looking to spice up your writing in historical style? Check out more than 50 Victorian slang terms that just might be able to make a comeback. Why not resurrect a bit of Victorian English to give your work a lovely bit of flair? 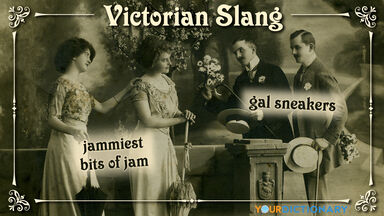 For such a proper point in history, Victorian English included some quite shocking slang terminology. Would you have expected such cheeky terminology from Victorian ladies and gentlemen? Where were their good manners and etiquette?

Some Victorian sentiments required stringing together two words to form a slang phrase. Some represent catty name-calling while others are even a bit salacious. None of the phrases listed below are commonly used during modern times, but wouldn't it be fun to bring back a few?

The Victorian English slang phrases below all have three or more words. The longer phrases from that era get, the more interesting they become. Folks from that era certainly knew how to get creative with their use of informal language!

From Victorian Usage to Modern-Day English

When you review these commonly used Victorian era sayings and expressions, it becomes easy to see how slang affects the English language. Now that you have been exposed to these informal phrases from centuries gone by, explore a few more examples of slang words from the past and today. This will provide unique insights regarding how language evolves over time, even the informal vernacular associated with a particular point in history.