Money makes the world go around — at least, that’s what some people say. Money slang words and sayings are commonly used in everyday language. Discover a selection of more than 60 slang words for money to use in your communication or writing. 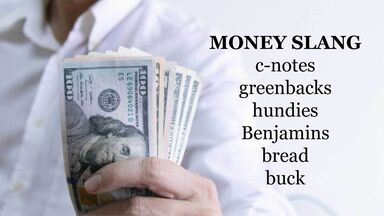 Many of the slang terms for money refer to actual physical money, though it can also be used to refer to the value that money provides to those who have it.

Slang for Making or Saving Money

Some slang words and expressions for money refer to the act of making money or saving it.

Many of the slang words and expressions related to money are so commonly used that people don’t even realize that they represent slang usage. The impact of slang on the English language is really fascinating. Now that you know dozens of slang terms and sayings for money, take the time to explore some more examples of slang words.