Anyone Can 'Ugly Cry': Defining the Slang Term

If you’ve ever had a “good cry,” you know how therapeutic it can be to let it all out. But the term “good cry” doesn’t exactly explain what happens during a sobfest (what’s good about it, anyway?). Perhaps the term you’re looking for is “ugly cry.” 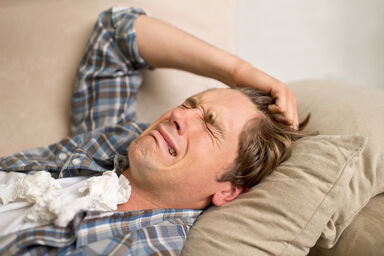 Man crying while lying on the sofa with tissues
Advertisement

Ugly Cry: You Know It When You See It

An ugly cry is more than a sniffle and a single tear running down your cheek. It’s an out-and-out, face-scrunching, hankie-honking, nose-bubbling weep-o-rama that embarrasses everyone who sees it, but not the person who’s actually doing it. The thing that makes you ugly cry is usually very significant, but being in a weepy mindset may bring out an ugly cry from something small, as well.

It can be used as a noun or a verb, depending on what you’re describing:

Think of the emoji with the rivers of tears spilling from its eyes. That’s how an ugly cry feels — unrelenting, unabashed, unashamed emotion pouring out of you (and probably smearing your mascara).

When Should You Ugly Cry?

Ugly cries can be sad or happy — as long as there’s a little slobber involved, it counts. Moments that might cause an ugly cry include (grab the tissues):

Keep in mind that the phrase “ugly cry” has a little humor in it — otherwise, you’re actually calling someone ugly, which is mean. Don’t use it in the context of grief or a very serious situation when you could offend someone by insulting their feelings. “Ugly cry” is more of a self-own, and isn’t applicable in times when a person is deeply, genuinely sad.

Oprah, Queen of the Ugly Cry

While Oprah Winfrey didn’t coin the phrase “ugly cry,” she perfected it. Between the emotional topics on her talk show and her own famous ugly cry over a surprise visit from Mary Tyler Moore in 1997, Oprah is probably responsible for most of the ugly cries in the late 20th century. But in the true essence of the ugly cry, she’s never ashamed of her own blubbering reactions — so follow Oprah’s lead and cry when you want to.

It’s A Feeling and a Meme

Like its cousin “All the feels,” the ugly cry has become its own meme. It spiked in popularity in 2011 and has sobbed its way around the internet via GIFs of TV characters, cartoon animals and anime heroes bursting into wretched, ugly tears. You can find an “ugly cry” GIF easily enough, but if the right one doesn’t come your way, feel free to reply to an emotional moment with a simple “ugly cry.” Your message will come through loud and clear.

Did your mother ever tell you not to look in the mirror when you cried because it would only make you sadder? It’s because you might be an ugly crier. Popularized by the 2011 movie Bridesmaids, “ugly crier” describes a person who isn’t as attractive when they cry, but doesn’t reference the cry-worthy thing itself. Ugly criers just scrunch up like that no matter what happens.

Whether you’re about to have a good cry or an ugly cry, there’s a way to let it out online. Use more emotion-related memes to share your feelings: