Whether it's professional, college, or one-on-one in your backyard, basketball is one of the most popular games in the world. Its popularity has even led to basketball slang found in everyday vocabulary. Check out a list of popular slang words you might hear around the court, and soon you’ll sound like a pro yourself! 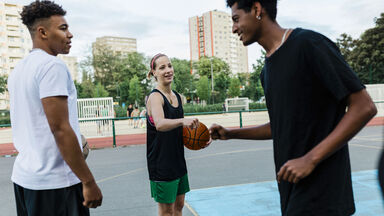 Players in a basketball game are intent on throwing the ball through the basket by all the legal means necessary. In the process, they might shout terms to their teammates about different strategies or techniques to try. And of course, they may also engage in a little trash talk with the other team! Here are some examples of basketball (or b-ball) slang and terminology you'll hear players and fans use.

If a player is throwing the ball and it flies the length of the court but still misses, it's an air ball. An air ball doesn’t even come close to making it inside the basket.

An alley-oop is a type of assist in which one player throws the ball toward the basket, and another player jumps up to dunk the ball. It’s a skillful way to bypass a tricky defense from the other team.

When a player goes for a shot and is fouled, they earn a foul shot. But when they make the shot anyway, they still receive the free shot, known as and one.

Sometimes a player makes every shot in a row. Each shot in a hot streak is often called an automatic, meaning that the player’s success seems inevitable. You may hear excited fans shout “automatic!” when their favorite player sinks several shots.

B-Ball is another term for basketball. Even though there are other sports that begin with the same letter (such as baseball), b-ball always refers to basketball.

The term baller originally referred to basketball players. However, it’s often used to describe people who are very cool and wealthy, or even as an adjective for the same quality. (“That car is so baller!”)

A brick is related to an air ball in that the ball doesn’t make it into the basket. But a brick shot bounces haphazardly off the rim or the backboard, prompting calls of “Brick!” from fans of the opposing team.

The ball must keep moving in basketball. A basketball player who catches the ball mid-dribble and continues to dribble – or who dribbles with both hands at the same time – is double dribbling.

If you make a three-point shot from the foul line, you’ve made it from “downtown.” You’ll often hear this term when someone makes a very unlikely shot regardless of the distance.

A player who makes a series of successful assists or sets up other players for key shots is dropping dimes. A “dime” is an assist. It comes from the phrase “dropping a dime,” referring to dropping 10 cents into a pay phone to help someone out.

Very talented players may master the fadeaway, where one makes a jump shot while falling backward through the air. The shot creates space for the shooter to make a more accurate shot while avoiding defenders. Michael Jordan had an especially impressive fadeaway shot.

Have you ever seen a player act like a minor touch is a terrible injury in hopes of earning a foul shot? This practice is known as a flop, and players who fall to the floor with exaggerated drama are known as floppers.

If you shoot the basketball underhand versus overhand, you might hear calls of “granny shot!” across the court. However, for professional basketball players like Rick Barry, the so-called granny shot makes for a pretty good free-throw percentage.

A player who is excellent at jumping with the ball can make a name for himself with his hops (jumps). Ideally, a player with a lot of hops can make more baskets.

Ever seen a player who can’t miss a shot from anywhere in the court? That player is making it rain – sinking shots from seemingly out of nowhere.

A man-to-man defensive strategy puts each player against another player of similar size and ability. This defense is more common when the entire team is equally talented.

Putting on a Clinic

Some basketball games are so good that they feel more like a basketball lesson. Players in these games are putting on a clinic, which is a learning session for basketball beginners.

A very talented basketball player may show off a bit when they’re winning a game. The loser of that game can consider themselves schooled (also known as taken to school).

A splash is a dramatic three-point shot from far away. Klay Thompson and Stephen Curry of the Golden State Warriors have the nickname “Splash Brothers” due to their ability to sink three-pointers.

Nothing but net! That describes a swish shot that doesn’t touch the backboard or rim as it goes through the basket.

Three in the Key

Even though players want to get the ball down the court as quickly as possible, they can’t travel to do it. Traveling involves a player carrying a ball without dribbling for more than three steps. It’s similar to a double dribble, but a traveling player is in motion while holding the ball.

Teams who choose not to practice man-to-man defense may choose a zone defense. Defensive players guard an area of the court, or “zone,” rather than individual players.

It was Dr. James Naismith, a Canadian physical education professor, who came up with the idea of nailing a peach basket on a balcony, and having the students in his class take turns throwing a ball into the "hoop."

The students were members of the YMCA's training school. Naismith wanted to come up with a healthy, fun sport where the students could burn off excess energy indoors and the game was easily playable in the confines of a small gym (which also functioned as an auditorium for plays and activities).

It was Naismith who named his new game "basket (for the peach basket) ball.” The game was an immediate hit with the students, and quickly spread to other schools. There was an initial problem with the peach basket, though: if the scorer got the ball into the basket, the game stopped until someone could free the ball. The basket, nailed high off the floor, still had the bottom intact!

Knocking the Bottom Out

Naismith and his "basket ball" recruits, though, quickly figured out that knocking the bottom out of the basket, and allowing the ball to be returned, bouncing, to the players made the game a lot more interesting.

Afterwards, they soon realized that people watching the game from the balcony were unwitting targets in case the ball flew past the basket. Naismith came up with the idea of using a board behind the basket to protect spectators. That wooden contrivance, now known as the backboard in basketball, is still in use today.

Now that you know the basic slang used in basketball, you’re sure to sound like a pro on the court – as long as you’ve got the skills to back it up! For more basketball resources and information, check out a list of inspirational quotes about basketball from some of the most famous players in history. You might also enjoy some awesome basketball facts about leagues, players and coaches.