Beatnik Slang: Lingo With a Legacy

The word beatnik is derived from the slang term "beat," which was popularized by Jack Kerouac after World War II. The term beat came to mean "beaten down," but Kerouac said that wasn't his intent. He saw the beat generation as people with intense conviction who happened to be a bit down and out. The lingo of this disaffected generation became the beatnik slang of the 1950s. 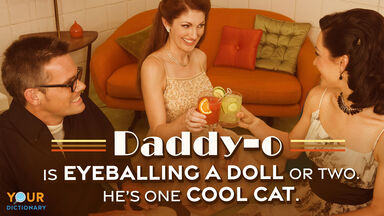 Beatnik Slang for Dating and Socializing

As the first generation referred to as hipsters, the beatniks of the 1950s embraced the good life. Music, booze, drugs, sex, and camaraderie were all on the table. Jazz musicians, in particular, attracted their own followings of hipsters who were a bit like today's groupies. As such, music venues were a great starting place for many dates.

Anti-Police Beatnik Slang of the '50s

Because of their so-called on-the-brink lifestyle and their engagement in activities that were sometimes illegal, beatniks weren't too keen on law enforcement. Some beatniks considered police officers to be their worst enemy.

The world is full of all kinds of people. Beatniks had plenty of slang terms used to describe people from every walk of life.

Slang for Situations and Experiences

Beatnik culture had many ways of describing the amazing experiences and situations in which hipsters found themselves. For example, they might say, "Did you cats have a blast?" There are a lot of additional ways to express yourself, beatnik style.

Modern-day hipsters aren’t a new phenomenon. They were the leaders of the entire beatnik movement from several decades ago. Even then, hipsters subscribed to a particular lingo, dress and attitude. In the ‘50s, anyone who was a hipster was in pursuit of whatever was cool, a slang term that survives to this day. Indeed, the beatnik generation slang was pretty hip. It wouldn’t have survived all this time if it wasn’t.

Slang From Decades Gone By

Of all the slang that’s stuck around, the beatnik slang of the 1950s has maintained the firmest hold on modern lingo. Understanding the slang from an era gone by can help you add authenticity to your writing, especially when you're setting a story in a previous decade. Although the list above pertains to a specific subculture, it might also be useful to check out a list of generalized slang from the 1950s. You may also want to learn about slang from many other decades, including the 1930s, ‘40s, ‘60s, ‘70s, and ‘80s. Using slang in your writing is a great way to incorporate authentic dialogue from the era in which your story is set.