If you spend any time around a group of bikers, you're bound to hear some biker slang. Many riders band together to form motorcycle clubs. These provide great ways to build camaraderie, enjoy the open road or give back to the local community. Some are formalized, while others involve a group of friends who cruise down the highway. There are also solo riders, known as lone wolves, who like the quiet and ease of riding alone. Solo or in groups, bikers have a zest for life and a unique lingo all their own. 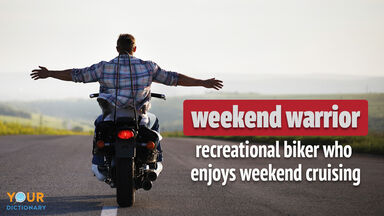 Whether you're planning to start riding or simply want to better understand biker slang, explore these terms to develop a better understanding of biker lingo. First, consider biker terms for the fun-loving riders themselves. From citizens to independents, there are many different terms for people who ride motorcycles.

Since many riders like to go out with their clubs or a band of friends, it’s likely you’ll find a bunch of motorcycles roaring by together. Whoever holds the role of the front door is the first rider in the group.

The term associate is used to describe someone who is a member of a particular motorcycle club. It's more commonly used by people who are not bikers, to refer to those who are.

A biker who isn't known to be affiliated with any motorcycle club or biker organization might be called a citizen.

Those who like to ride alone are known as independents. They may use a bike as a regular means of transportation, or simply enjoy riding on their own for relaxation. They may carry passengers on their bikes, but their preference is to ride on their own rather than joining up with other bikers for group rides.

A weekend warrior is an occasional biker. Weekend warriors use another type of vehicle as their primary mode of transportation, but enjoy cruising on weekends or other days off. They're recreational riders rather than daily riders.

This is a term of endearment for a biker’s girlfriend or wife. If a biker refers to his lady as such, you’ll know to keep your paws off.

Outlaw biker groups have a unique subculture, with some of the roughest elements calling themselves one-percenters. After sensationalized media coverage of a riot in 1947 during a California motorcycle rally featured fierce-looking bikers, The American Motorcycle Association (AMA) issued a statement saying 99% of all bikers were upright citizens, with only one percent being outlaws that causing trouble. As a result, outlaw groups started identifying as one-percenters.

There’s no denying the fact that bikers have their own unique flair. Consider some of the ways bikers refer to their vests, patches and other apparel.

This term is used to describe minimal motorcycle helmets. They provide head covering, but not the full-face protection of other types of helmets. Because they provide protection only for one's head (and, of course, brain), they came to be referred to as brain buckets. This term is also used in military slang, as the helmets that combat soldiers wear are a similar style.

Bikers often wear chaps over their pants to provide extra protection for the legs. They are typically leather, covering only the front part of the wearer's legs. They do not cover the rear end or groin area. Chaps are also worn by cowboys.

Bikers often dress in traditional black leather apparel, but they typically cover their vests with various embroidered patches. These patches are referred to as a biker's "colors." They can have many meanings. Some patches show which club the biker is affiliated with. New bikers who undergo an initiation rite and are accepted are "patched." That means they've earned their stripes — or patches — and can officially sport the patch on their clothing. They may also reflect places a biker has traveled or bike rallies the person has attended, as well as favorite biker gear brands or causes important to the wearer.

All motorcycle riders need to wear a "dome," which is biker slang for a helmet. In most states, motorcyclists are required to wear helmets. Even where they're not mandatory, it's certainly a good idea to wear head protection.

Some bikers wear "cuts." A cut is a denim jacket with the sleeves cut off. The fabric is usually frayed around the armhole. A biker's cut frequently serves as a canvas for patches and logos. It is usually worn as the outside layer of clothing, often worn over a leather jacket.

A biker's vest or jacket may be emblazoned with the biker's "road name," which is the individual's nickname within their motorcycle club or overall biker subculture in general.

Slang for Types of Motorcycles

There are several different styles of motorcycles, which are not always referred to by their formal names within the biker culture. In biker lingo, there are nicknames for most kinds of bikes.

Choppers are customized motorcycles that have been adjusted to the rider's preference, most commonly with extended forks. When a rider decides to customize their ride, they start chopping off unnecessary parts. Though they started as complete custom jobs, it's now possible to purchase a chopper-style bike. If you're a fan of The Walking Dead, you've seen the chopper that character Darryl Dixon rides.

Crotch rockets are bikes that are built for speed. On these bikes, riders sit in a hunched-over position, more so than the leaned-back stance riders use on other types of motorcycles. These are sports bikes with room only for one rider. The Kawasaki Ninja, which was first introduced in the early 1980s, was the first crotch rocket. Several companies make crotch rockets now.

The style of motorcycle made for general cruising is referred to as a cruiser. This type of bike is not intended for cross-country journeys or racing. Instead, it's intended for relatively short-distance rides on ordinary roads within the confines of the speed limit.

Bikes that have one wheel on the front and two on the back are referred to as trikes. Of course, that's a reference to the tricycle-like nature of these riding machines. These are favorites among some senior citizens who ride, though they're not the only ones who ride them.

This is a bike built for comfort and flair rather than speed or performance. Touring bikes are a favorite amongst weekend warriors. They are a great choice for people who like to take long motorcycle trips or to regularly ride with a passenger on the back.

Not all slang terms about motorcycles are descriptive of the actual type of bike. Some refer to accessories, modifications or how a particular bike runs.

Some bikers prefer a straight-up form of ape hangers. These are high handlebars that rise up beyond the height of the rider's shoulders when in position on the bike. These are most commonly found on cruising bikes.

This is the top portion of a motorcycle's frame. It's usually the part of the housing where the fuel tank is mounted.

Motorcycles that have a second set of pegs beyond those used by the driver have "buddy pegs." These are footpegs intended to be used by a buddy that the driver is taking along on a ride as a passenger.

A "junk bike" that is used solely to rob parts from is referred to as a donor. The parts are used to repair another bike. Motorcycle shops may keep donors on hand, as well as do-it-yourself bikers who do their own maintenance or enjoy refurbishing or rebuilding motorcycles.

This is a bike that is in such great shape it starts on the first attempt. If you're shopping for a bike in great condition, this is certainly something to look for.

A sissy bar is a backrest behind the passenger seat on a motorcycle. It allows the passenger to lean back while riding. Riders often using sissy bars as a spot for tying down a backpack or other type of gear bag.

Of course, not all biker slang fits neatly into a category. There’s also some general lingo that's commonly used in the biker world, including slang terms related to the act of riding.

This term relates to riding on a windy or mountainous road. The highest and tightest point of any curve is referred to by bikers as the curve's apex.

When the suspension system of a bike is so weighted down that it's close to dragging the road. There is no space left for it to travel any further.

In motorcycle lingo, the word "century" refers to speed rather than years. If you hit a century on your bike, that means that you've reached 100 miles per hour.

Eating asphalt is, perhaps, the number one thing bikers try to avoid. In fact, this is why bikers are so meticulous about their leather gear. If you’re eating asphalt, you’ve crashed your bike and your body has hit the ground.

The tuck is a stance where the biker keeps his or her head low and arms tight to the side. This makes the rider one with the motorcycle, reducing drag from the wind.

If you’re considering life as a biker, let the adventure begin! Whether you plan to ride alone as a weekend warrior or with the camaraderie of a local club, it’s helpful to know some motorcycle lingo. If you’re planning on spending a lot of time on the road, you want to be careful to avoid any accidents and incidents with the police. Take a look at these slang words for police as you make sure you stay on the right side of the law. Or, if you're just fascinated by slang in general, take a look at the history of slang. Then explore how slang affects the English language.