Bougie or Boujee? Ending the Confusion Behind the Slang Terms

If you're criticizing someone for pretending to be high class or elite, you may be looking for the slang word bougie or boujee. Which one is short for bourgeoisie — and where does bourgie fit in? Keep reading for an explanation of the proper choice, where both words come from and when you should use them. 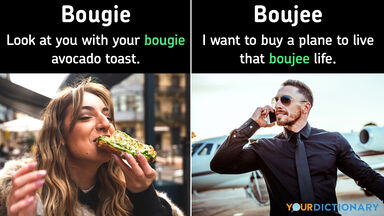 So is bougie slang, or is it boujee? The adjectives bougie and boujee are often used interchangeably as slang words for "seeming rich." It's easy to see why — they seem to have the same pronunciation and definition. But there's a slight difference between these words that you should know beyond how to spell bougie.

You're more likely to see bougie as a reference to people who use social media to show off fancy clothes, expensive cars or stereotypically "white" activities (such as yachting or buying expensive yoga clothes). Boujee, popularized by the song Bad and Boujee by Migos, primarily refers to Black people who have "swag" by making their own money.

While the connotations differ by context, bougie is typically a criticism of someone. It's similar to the 1980s word yuppy (Young Urban Professional).

Examples of bougie in a sentence include:

When used in the Black community, bougie with a hard /g/ sound typically describes someone who appears to be trying to act like they'd rather be in the White community. This may include having a higher education or salary than their family members or neighbors.

Boujee, on the other hand, is not an insult. It's hip-hop slang that defines someone as enjoying a (well-earned) lifestyle in luxury, but who still knows their more humble roots and possibly still lives in their old neighborhood. A similar term would be baller.

Because boujee is pronounced with a soft /j/ sound, it's easier to tell whether you're trying to compliment someone for their lifestyle or criticize them as bougie. It references a person who did not inherit their money but still lives a high-class lifestyle.

Both terms are short for bourgie (pronounced just like bougie), which itself is short for the French term bourgeoisie (boo-zhwah-ZEE). The term began as a reference to those who prefer to live in French cities instead of the country, and now refers to the materialistic middle class, which falls below the very wealthy people in the upper class.

According to Karl Marx, there is an eternal struggle between the bourgeoisie, who own the means of production, and the proletariat (working class), whose labor makes the economy go around.

Examples of bourgeoisie in a sentence include:

As you can see, bourgeoisie is a noun, not an adjective. The adjective form is bourgeois (boo-ZHWAH), but its usage is not as popular as boujee or bougie. Using bourgeois in everyday conversation is, as it turns out, quite bougie!

The Ever-Changing Nature of Slang

The English language is fluid and always adapting, as seen by how often our conversational slang changes. A term that began as a descriptor for city-dwelling French citizens became a popular hip-hop term for those who have made it into the next economic class. To keep up with modern language, explore another trendy term, capping slang. For more slang words that have changed over time, check out these examples of slang words from the past and today.