If you're heading off on a holiday to the United Kingdom, it'll be handy to have certain British slang definitions down pat. It's nice to know what the locals are saying, and it makes it a lot easier to have a conversation without looking (and feeling) like a dolt! Open yourself up to the delights of the English language, especially the variety that's spoken where English got its start. You'll have a blast and learn more than a few new words that might be ripe for importation when you come back home. 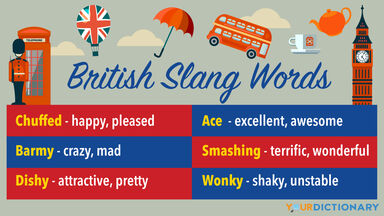 U.K. slang is nothing if not interesting! It includes quite a few fun and unique ways for people to express that they are happy or otherwise share positive sentiments.

U.K. slang includes some interesting insults. Master a variety of British insults and you'll be prepared to reply with some snarky put-downs. You'll be chatting like a local in no time at all!

British Slang for People or Things

No collection of slang would be complete without casual terminology used for nouns that are common among those who speak the language or dialect.

British Slang for Actions or Behaviors

Of course, there also have to be slang options to describe actions and behaviors people engage in on a regular basis. Getting a good sense of UK slang terms that describe everyday actions will help prepare you to understand what the locals mean when they're describing actions.

Nothing makes the language more colorful than descriptive words. Fortunately, there are quite a few descriptive British slang terms that paint quite a vivid picture to anyone who knows what the informal words mean.

Your grasp of the slang portion of British English won't be complete unless you master a few of the most common U.K. slang exclamations and expressions. These will help you know how to react to what others say, how to express appreciation or end a conversation appropriately.

UK Slang for Emotions or Attitudes

Finally, explore a few U.K. slang terms that are helpful when it comes to describing a person's attitude or expressions of emotion.

As an English speaker, it's nice to travel to countries where you can understand the language, like England, Scotland or Ireland. Still, in an unfamiliar country, there's bound to be informal lingo that's you don't recognize. When in doubt, refer to this list so you can carry on conversations with ease, even with the locals. Slang can vary a lot throughout England. f you hear a word that's not on this list, give a Cockney translator a try. Cockney is slang from a certain neighborhood in London. After a quick review, you'll be able to confidently go out there and build connections with new friends! For even more fun, take a look at these common U.K. expressions.