There is a difference between Brummie and Cockney. Both are English dialects, but they are spoken in very different parts of England. Brummie is spoken in the West Midlands of Birmingham and Cockney is native to the East Enders in London. Learn more about Brummie vs. Cockney dialects and their differences. 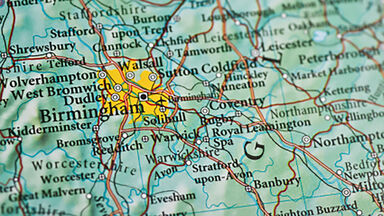 Brummie is an English dialect that is spoken in the West Midlands of Birmingham in the United Kingdom. Those who speak with this accent tend to end sentences in a downbeat or a lower octave, which may be interpreted as less attractive to a listener.

In the past, many British people have not held a Brummie accent in a high aesthetic value. It has not been one of the accents that convey a certain savoir-faire, or element of class. However, this stereotype is changing in current times.

To many British individuals, Brummie is viewed as a monotonously nasal accent that is simply miserable, and many think it is just plain ugly to hear. This is, in fact, quite a bit of linguistic prejudice that is held by many in the United Kingdom.

Cockney is also an English dialect; however, it is a dialect that is native to the East Enders in London. Cockney English is spoken in various parts of London. It is revered as a working-class linguistic dialect.

In the 19th century, Cockney was a dialect of English that was native to the criminal underworld. Its popularity grew as the use of the dialect was incorporated into the art world. It has been seen in the literary arts as well as in stage plays and possibly even songs.

London has long been known as the linguistic center of gravity when it comes to British linguistics. Cockney is a bit different than the “popular London” accent that prevails throughout London. For example, Cockney has a specific accent and slang to it not found in the "popular London accent." However, while the two accents are distinctly different, a true Cockney accent is not traditionally found outside London.

Many people do not realize that the word "cockney" refers to both the people who speak the dialect and the dialect itself. Initially, the term “cockney” referred to a weak townsman of the 17th century. Taken from the phrase “cock’s egg,” Cockney held images of a misshaped egg, to which a weaker townsman was likened. However, as time progressed, it went on to mean a person that was from London.

While the Cockney accent has been used for decades to assign stigma to a working-class person from the East End of London, it is still an accent that is highly preferable to that of the Brummie dialect. However, for centuries the Cockney accent still carried with it the stigma of ignorance. Working-class individuals were not necessarily seen as people who the average upper-class Londoner would think of in high regard.

The issue with the Brummie accent, and the reason it is valued so much less than the Cockney accent, is one of intonation. The pitch in which the Brummie dialect is spoken conveys with it one of monotone and depression. This is the real reason why many British people dread hearing it. Cockney, on the other hand, is more upbeat but slang-heavy. It's known for its ingenious rhyme slang within the sentence.

While neither Brummie nor Cockney linguistic dialects are the Queen’s English, they do make up a significant historical backdrop of the United Kingdom. For a long time, how a person spoke (the dialect or accent) was indicative of their social status in the United Kingdom. While much of that has changed now, there is still a bit of a negative stigma attached to either dialect from individuals who are British or who reside within a British-ruled colony.

Many people outside of British colonies are none the wiser to the linguistic dialects of Brummie and Cockney. If you asked the average American, for example, if they knew the difference between Brummie and Cockney, you might initially notice a look of bewilderment prior to receiving their answer. Therefore, you might want to dive into the dialect vs. accent debate. That way you can know the difference.