Did you read a Tweet with capping in it? Are you confused about what they are talking about? You're not alone! Learn the meaning of capping, no cap and capper through real-life examples. 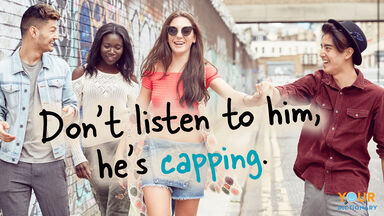 What Does Capping Mean?

If you aren’t part of the TikTok universe, then you might not know what capping or cappin’ means. Well, to keep it simple, capping means "to lie." This slang term comes from the root slang word cap, which is "a lie." However, it shouldn't be confused with the other slang meaning of cap, which is "a bullet."

Capping isn’t a new word to TikTok or even Twitter for that matter. It’s been floating around on the internet for a while. Explore a few different examples of how capping or cappin’ is used.

Definition of a Capper

Given that cap and capping have to do with lying, you can probably guess what a capper is. Well, a capper is a slang term for "a liar." In addition to being found in Tweets, capper makes its way into multiple rap songs. It even is part of the title Full Time Cappers by G-Easy. See how cappers might be used.

Another variation of the slang word cap is no cap. This slang expression is similar to the expressions "no lie," "for real" and "dead serious." Basically, when you "no cap," you are being real or not lying about something. "No cap" is found all over the net and in several song titles. You can even find a #nocap trend on TikTok. See a couple of real-world examples using "no cap."

While capping and no cap slang might be trending terms on the internet right now, they are by no means new terms. The term "to cap" has been part of Black slang since about the late 1930s, according to Green’s Dictionary of Slang. However, the term typically has to do with bullets or shots.

But, this is only one usage of the term cap. It also meant "to surpass," coming from using cap as the top limit of something. Additionally, using the slang term capping to mean lie can be found in 1980s in hip hop and song lyrics by Too Short and UGK, according to Genius.

You can’t have new slang terms without a little controversy. And capping does just that. While capping and no cap are trending, Joey King recently deleted a tweet about her ex-boyfriend capping. She stated to Howard Stern she removed the Tweet due to racial controversy.

No Cappin’! Your Slang Game Is Lit

Slang words start trending quickly. From fleek, to wok, to lit, are you keeping up on your slang game? If you aren’t, you are by far not the only one. With social media sites popping up like wildfire, it’s hard to keep up. However, now if you ever see capping or no cap, you know exactly what they mean. Ready to learn more? Discover whether bougie or boujee is the slang word you're trying to use. Then, dive into some popular rap words.