Have you ever fallen under the spell of a Cockney? The term was originally reserved for Londoners who were born within earshot of the ringing bells of St. Mary-le-Bow, a historic church in East London. Today, the term Cockney is a tip of the hat to good ol' fashioned, hard-working Eastenders. 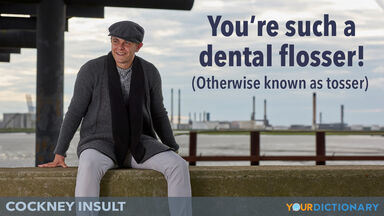 Cockney insults display a level of shrewdness that’s difficult to rival. Cockney rhyming slang may have been around since the 16th century, but it really came to life in the 1840s among market traders and street hawkers. You could compare it to a secret language. Cockney slang was meant to disguise the traders’ conversation from regular passersby.

Brilliant, right? Imagine how many unassuming customers were taunted! Today, you won’t interact with too many costermongers (those selling fruit and vegetables from handcarts) as you stroll through the streets of East London, but, this is where the clever way with words known as Cockney slang originated. It’s something that’s endured and is commonly used for sneaky (or obvious) insults.

Cockney slang insults are fun and unique phrases, but they won't make sense if you don't have a basic understanding of how they're formed. Cockney sayings are crafted so that they rhyme in some way with the "real" word they're meant to replace. There is no other relationship between a Cockney term and the word it replaces.

This manner of speaking is not limited to put-downs and snarky remarks. Of course, not every Cockney inflicts insult and injury on the average passerby, there’s also rhyming British street slang for all parts of everyday life. And, of course, these expressions can certainly be used in an insulting way or combined with a stereotypical insult.

When you hear people using British street slang like this, especially insults, you might find yourself in need of a Cockney translator. In order to figure out what Cockney sayings mean, it's important to consider how this type of slang is created in the first place. Using the steps below, you can even generate your own terms that follow the tradition of British street slang.

Language Worth a Butcher’s Hook (Look)

Can you imagine showing up to work every day with a bunch of friends who’ve developed their own language of trickery? The bubble baths are sure to make the workday fly by. These guys were pushing their creativity to the limit while earning money to pay their Duke of Kent and indulging in a pint or two. If that didn’t make for a happy memory, what could? It’s good to see that the creativity of Cockney slang lives on. Some Cockney terms have even made it into everyday language, as with writers who love to get down to brass tacks when gearing up for the next essay or report. Now that you've explored this subset of UK slang, broaden your horizons by learning even more British slang.