Cockney Translators: Get to Know the Dialect

Cockney is a dialect of British English. Although it originated in London, it’s generally associated with the working class in one part of the city. The pronunciation and unique rhyming slang make it an interesting dialect but difficult to understand. “True" Cockney is associated with those living in the East End of London. If you’re new to the dialect, you’ll certainly need a Cockney translator in the early days. Explore some wonderful resources. 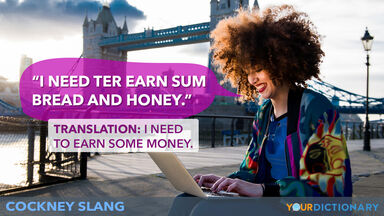 Cockney describes both the people and dialect of an area in London. Those who speak "true Cockney" are found in the East End of London; however, the dialect and accent are used in London and the surrounding areas in various forms. An interesting rule of Cockney is that an individual must be born within hearing distance of the bells of Saint Mary-le-Bow to be considered a true Cockney. People outside the region might have a Cockney accent or understand Cockney insults, but their version of Cockney may not be considered true Cockney. To get a better grasp of this rhyme slang accent, explore a few fun features.

One of the most interesting features of Cockney is the rhyming slang. This often uses two words or a phrase to mean one standard English word. For example, "apples and pears" means “stairs,” and "plate of meat" means "feet."

The Guardian is a British daily newspaper. Of course, it has expanded into global news, but its roots are in London. Explore a few expressions from The Guardian's ultimate guide to Cockney slang. It defines a lot of popular expressions and provides a brief history behind these popular sayings. Check out a few examples of this Cockney slang translator.

If you’re ready for some fun, take a look at Learn the Cockney Accent with Jason Statham on YouTube. Spoiler alert: they couldn’t afford the real deal. Instead, you’ll learn from a Cockney lookalike in this video.

Translating the Cockney accent can be easy with a translator. All you have to do is type in a word or phrase, and they’ll turn it into a Cockney expression for you. If you bookmark one of these pages, you’ll be sure to survive an afternoon in the East End of London where the dialect takes quite a different turn.

The Wonders of London

The wonders of London never cease to abound. It’s a vibrant, bustling city where, from the east to the west, you’ll have to adjust your ears to a very different dialect depending on where you go. Ready for one more British dialect? Another intriguing regional accent with flair is the Brummie accent. Find out Brummie vs. Cockney distinctions.

No matter which side of town you make your home base, a list of British slang definitions can help you immerse yourself into the culture. Along with that, you might like to study these common UK expressions on the plane ride over. Wherever you go, we hope you’ll be “ave’n a bubble” all the way through!