1920s slang might seem like baloney, but only if you’re a Mrs. Grundy. If you know your onions, it can be duck soup to avoid getting balled up. What does any of this mean, you may be asking? Check out some swell 1920s slang words we should bring back to make the 2020s the new roaring twenties. Now you’re on the trolley! 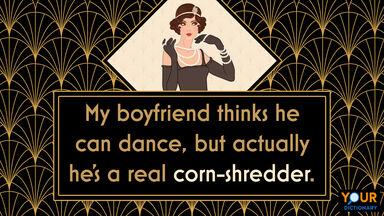 1920s Slang Words That Can Be the Bee’s Knees Again

Some 1920s slang terms haven’t stood the test of time, and we think that’s a real shame. Here are some slang terms that we think should be brought into modern usage. Don’t let them ball you up, mister — they’re the cat’s pajamas!

Old Drinking Slang Worth Bringing Back

As you may know, the roaring 20s was the era of prohibition, meaning the production, sale and purchase of alcoholic beverages was illegal. So it’s no surprise that many slang words for alcohol, intoxication and bootlegging came out of the 1920s. Expressions for booze and/or getting drunk never go out of style, so why not bring back the classics?

Some of these may ring a bell while others will sound like a foreign language. Either way, these expressions were fun back then and we think it’s high time they came back. After all, couldn’t we use a little fun right now?

While bringing back old slang is a great way to recycle language, don't forget to keep using the terms that never went out of style! Tons of terms we use today are actually from the 1920s. While many 1920s slang words and phrases are typically only found in old movies or period pieces, these terms are still going strong.

Study Up on Historical Slang

The 1920s gave us countless colorful slang words, but it’s not the only decade to do so. Diversify your slang with these timeless terms.