Common UK Expressions: 30+ Sayings the British Are Known For

If your friend said to you, "Well that game really takes the biscuit," would you have any clue what they were talking about? If you were up on your British sayings, you would. To keep you in the know, investigate a few fun and cheeky U.K. expressions to add to your vernacular. 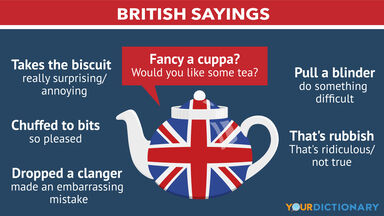 The United Kingdom is known for its rich and unique accents. But it has some fun sayings too. From "ol' blighty" to "cheeky," you can find some spectacular British slang not enjoyed in the United States. Dive into a few brilliantly British sayings you might use at your next party.

Do you have dreams of sounding like the queen? Then, it's time to explore some posh British sayings.

Like American English, British English has many unique slang phrases and expressions that you'll commonly hear on the street. While "snog" or "blimey" might sound a bit odd to you, it's all part of common slang to Brits. Never get lost again by checking out these fun expressions.

Fun British Sayings to Add to Your Vocab

You can't forget about British idioms when looking at slang. Idioms just make things more fun! You can even give these British sayings a try at the dinner table.

Don’t stop now! You'll be a true Brit once you learn some unique slang terms to push your British vernacular. It will be bloody brilliant. You might even be gobsmacked!