Hearing hillbilly slang punctuating a sentence might be a good way to make people giggle, but tread carefully using this language in your writing. Not everyone knows what a hillbilly is, so some might not get the context of the nonstandard terminology that you’re using. The term hillbilly, a word many backwoods residents embrace to describe themselves, isn't the put-down it's implied to be. 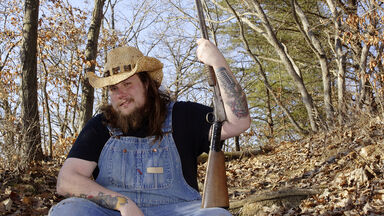 Creative curse words are a familiar aspect of hillbilly culture, with some terms and sayings that are much more interesting than more traditional expletives.

Puttin' On the Hillbilly Feedbag

One thing hillbillies know how to do is whip up tasty, down-home dishes using simple ingredients. When hillbillies get hungry, they just might seek out some vittles, like sliced ‘maters and mashed ‘taters. Yummy!

Hillbilly Talk for Directions and Locations

Have you ever asked for directions in a really rural area? You probably didn’t receive specific instructions. Hillbillies are excellent at coming up with unusual and interesting ways to describe distances.

Phrases that have nothing to do with the meanings of individual words are a big part of hillbilly slang. It includes several phrases for everyday actions or items.

Of course, not all hillbilly talk involves full sayings. It definitely includes some unique twists on individual terms.

The word hillbilly was first used in print (with a different spelling) at the turn of the twentieth century in a New York Journal article by political correspondent Julian Hawthorne, who was entranced by the word. His work described a "hill-billie" as:

"A free and untrammeled white citizen of Alabama, who lives in the hills, has no means to speak of, dresses as he can, talks as he pleases, drinks whiskey when he gets it, and fires off his revolver as the fancy takes him."

Hawthorne’s article might have been the first time that a yankee publication in New York published an article about hillbillies, but the word, culture and corresponding slang existed long before he decided to tell the tale.

The term hillbilly has long been used to describe people who dwell in rural mountainous or hilly regions of the United States, especially in and around the Appalachian and Ozark Mountains of the southeastern region of the country.

The stereotype of hillbillies as being poor and socially backward might have elicited snickers among people in other regions (who naturally thought themselves of a higher social class than those backwoods hill dwelling hicks), but hillbillies were also noted for their independence and self-reliance. They just didn't seem to know they were supposed to be pathetic! They rejected that attitude along with the attempts of the city folk to reform them. Spoken like a true hillbilly, you got to admire their gumption!

A Hillbilly Ain't a Redneck!

Hillbilly doesn’t mean the same thing as a redneck. People tend to confuse hillbillies with rednecks, and although there can be some overlap (some hillbillies are rednecks and some rednecks are hillbillies, but a person doesn’t necessarily identify as both), both groups tend to correct you very quickly if you make the mistake of assuming they're all alike.

Hillbillies are strong and individualistic, and have a good deal of pride. Throughout history, social workers who thought they'd help the mountain people often found themselves chased out of their cabins at the point of a shotgun. The social workers learned a very quick and valuable lesson: just because you're poor and live in a rural area, it doesn't mean you don't have a great deal of pride. It’s not unusual for rural slang to develop. If you’re interested in learning more about terminology specific to particular geographic areas, spend some time exploring Canadian slang by region.