When looking for “homosexual” slang terms or LGBTQ slang, it is important to know which words are inappropriate or describe people in a derogatory manner and should not be used. Members of the LGBTQ community may use some of the terms themselves; however, that does not give everyone the right to use an otherwise negative or hurtful word. 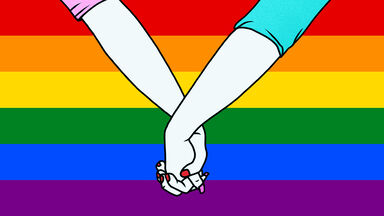 Slang Terms for People Attracted to the Same Sex

The term “homosexual” is defined as any person sexually attracted to someone of the same gender. In the modern world, this term feels outdated and is often considered offensive because gender identities are changing.

This list includes common gay slang (sometimes referred to as “homosexual slang”) terms with explanations, so you can see what the consequences of using each one might be.

Lesbian women have often been referred to as “dykes” by their critics. This word is cruel and shouldn’t be used. While it has been reclaimed within the lesbian community to some degree, like "fag" or "faggot" for gay men, there is something about this word that makes it seem worse. Perhaps it is the harsh sound of the word "dyke," or perhaps it is the fact that so many times it is a word of insult and attack.

Neither “fag” nor “faggot” is an appropriate word to use to describe someone else. They are both slang terms for a gay man and have historically been used to mock men who act in feminine ways.

Some gay men will use this word to describe themselves, but it’s often done in a playful manner. It is best for heterosexuals to avoid using the words “fag” and “faggot,” because they generally have a very offensive nature.

The problem with the word "gay" lies in the fact that people often use it in inappropriate ways. For example, many individuals use "gay" to say that something is stupid or lame. They might say, "That TV show last night was gay." In this sense, it is very offensive to use the word “gay,” because using “gay” to describe something that is stupid or lame is also referring to gay men or gay people as stupid or lame.

The word “homo” is an abbreviation of “homosexual,” and it has been used in a derogatory way by heterosexual people for many years. Since the term “homosexual” is not appropriate, you can guess that “homo” isn’t either.

A lesbian refers to a gay woman, or a woman who is attracted to other women. The word "lesbian" is appropriate for general use since it is the correct name for a woman who dates other women. However, make sure you are not using it in an accusatory or insulting manner.

It's not necessarily always just what you say, but also how you say it. While "lesbo" is to some extent just a shortened version of the word "lesbian," it tends to be used in a mean and derogatory way and should be avoided.

In today’s society, people are challenging all the social norms associated with relationships, sexuality, and gender identity. These people may not be gay, so other terms to describe them were created or popularized.

The term “ace” is short for “asexual.” An asexual person doesn’t experience sexual attraction to other people. You can use the word “ace” like you would “gay” or “lesbian” as long as you’re not trying to be offensive.

As with many other terms, as long as you’re not using “bi” as an insult or in an offensive way, it’s an appropriate term to use.

“Cis” is the shortened version of “cisgender.” It generally refers to a person who identifies as the gender they were assigned at birth. The term “cis” doesn’t typically have a negative connotation, so it’s fine for anyone to use.

“Closet” is a state of being totally private about your sexual orientation or gender identity. This can mean not admitting these things to yourself or not publicizing them. This is not a generally offensive term unless you are being accusatory.

The term “pan” is the shortened version of “pansexual.” The word “pansexual” describes a person who is attracted to people of all gender identities. If you’re using “pan” in an appropriate way that isn’t offensive, it’s fine for general use.

Having relationships that are consensually non-monogamous is called polyamory. “Poly” is short for “polyamory” or “polyamorous.” When used correctly, “poly” is an acceptable term in general use.

Like many other specific groups of people, members of the LGBTQ community have developed their own way of talking to and about each other. These slang terms should generally only be used by members of this community.

Be Sensitive With Slang

When in doubt, it’s best to ask someone from this community or check a resource such as GLAAD (Gay & Lesbian Alliance Against Defamation) about the use of a slang term. If you want to learn more about LGBT terms, start by learning what LGBTQIA+ stands for.