How Slang Affects the English Language

Hundreds of new slang words are added to the English language every year. At the same time, older words fall to the wayside. It’s the circle of linguistic life. While some slang words like “cool” stay the same for generations, your grandma probably would have looked around for a fire (or a bar) if she heard “that’s lit.” 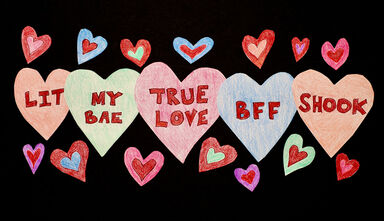 Slang is informal language that typically applies to a particular group of people. Every language has its own slang words and phrases that are constantly changing and evolving. The word slang itself came about in the 1700s and was likely used to refer to the vocabulary of the “lower” classes, specifically “disreputable” people. One suggested origin of slang proposed by linguists is the Norwegian word slengenavn, which means “nickname.”

Sometimes “new” words are just old words that have been repurposed and given a different meaning. Like history, slang tends to repeat itself. Additionally, it is constantly evolving, meaning dictionaries are updated every year to keep up with the trends.

Some words that were once cool have faded from use, only to be revived by the current generation with a different meaning. One such word, in fact, is cool.

These old words and many others continue to be used widely with their original meaning, but over time they take on new meanings for younger generations. This phenomenon continuously expands and enriches the English language.

There isn't one hard and fast rule as to how people use slang. Ultimately, slang helps you to connect to the people around you. It can create emotions, help you stand out in a crowd or even provide a sense of belonging. Slang can signify that you are part of a group or understand what someone else is saying. Jonathon Green, a “scholar of slang” who has compiled his own Dictionary of Slang, has said:

“What slang really does is show us at our most human.”

Language can often be formal or stilted, but slang strips away the pretense and allows people to have fun with language in a way that can playfully disguise their true meaning or help people communicate and connect with each other.

One of the biggest ways slang has affected language in the 21st century is the rise of the internet and SMS text. Thanks to social media and the speed information can travel now, texting slang is constantly being updated and adopting new words and abbreviations. Internet slang varies and can be very specialized for particular groups or users of a certain platform and usually depends on a person’s age, social groups and who they are communicating with.

As internet slang has become more widespread, it has seeped into everyday spoken English IRL. For example, some people will use the acronym IRL in speech, just as they might say other slang that originated on the internet like BAE (before anyone else), YOLO (you only live once) and DM (direct message). Beyond abbreviations, terms like “dumpster fire,” “personally attacked,” “cringey,” “selfie,” and many more originated online. All of these words or their origins can be traced back to before the internet, but the internet made their development and widespread use possible.

Stay on top of the latest slang so you can flex your language skills.