A Long Look at 'Side-Eye' and Its Origins

You’re at a party and you spot your best friend’s boyfriend flirting with another woman. You try to play it cool, but when he walks past you, you give him a serious side-eye. Does he get the point? He’d better — a side-eye means business. 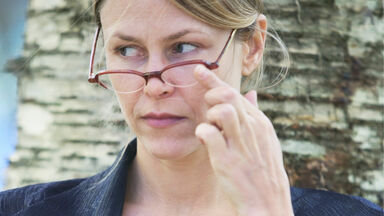 What Is a Side-Eye?

Side-eye (also unhyphenated side eye) is a slang term that means “scornfully judge.” It can be a literal side-eye (where you raise your eyebrows and slide your eyes to one side as if something scandalous is happening over there) or it can be figurative, as in “I’m side-eyeing you for that text you just sent.” Suffice to say, it’s never good to be on the receiving end of a side-eye, but it’s satisfying to send one.

The Origins of Side-Eye

While Gen Z may think they invented side-eye (and their usage has made it more popular in recent years), the term side-eye and the concept of silently judging someone is much older than that. The first usage of side-eye comes from over 200 years ago, in the 1797 publication of Remembrancer for Lord's Day Evenings:

Here we come to what calls for the strongest eye-sight, the most steadfast gazing. Our being in Adam has been looked on with a side eye. The subject has provoked dislike; I may almost say, contempt. It is now painful to speak of it.

It also appeared in The Arizona Republican in 1916:

In his mind's-eye he saw himself associating with actor-folk, who invariably side-eye him and whispered among themselves: "That's Alonzo Gubbinsb — frightfully wealthy — just about the real backing of the Frohman ventures — though, of course, Frohman is putting up the name and reputation!"

And in James Joyce’s Ulysses in 1920 (one of the few real words in a section of gibberish):

Language no whit worse than his. Monkwords, marybeads jabber on their girdles: roguewords, tough nuggets patter in their pockets.
Passing now.
A side eye at my Hamlet hat. If I were suddenly naked here as I sit? I am not.

All that to say, if you side-eye people on the regular, you have some esteemed (if not a bit passive-aggressive) company in history.

When Would You Side-Eye Someone?

Ready to lay on the silent judgment? Times when a side-eye is appropriate — nay, necessary — include:

Take ‘Side-Eye’ Up a Notch

Let’s say that the event you are judging is so bad that a side-eye just won’t cut it. What do you do then? More intense options to ratchet up your judgment include:

Don’t Get Side-Eyed For Your Slang

Save money on that night cream; there are easier ways to appear younger. Learn more slang from the 21st century with: