If you’ve been in the armed services, know an enlisted soldier, or watched movies about the military, you know that military slang is practically a second language. Military slang helps soldiers convey a lot of information very quickly and allow troops to bond in life-threatening situations. Learn more with a list of these sayings and what they mean in the context of the military. 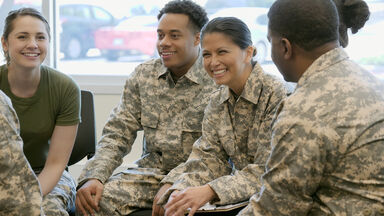 The armed services have long been a hotbed of extremely creative (and sometimes rather vulgar) language coining, all of which translates into military slang sayings that definitely stick in the mind. There are tons of military euphemisms that are so original that they've gained usage in the civilian world. Because many of these sayings contain profanity, they have been censored when necessary.

Even without considering a service member’s rank, there are many terms that describe people who have different duties. These terms can range from teasing nicknames for new recruits or members of another of the armed forces. Military slang for people can include:

Military Slang for Gear and Supplies

New service members have a lot to learn after they finish bootcamp. Learning slang for gear, supplies, and parts of a uniform can be very helpful. Here are some examples of military slang that describes what soldiers carry and wear:

Military Slang From the NATO Alphabet

Branches of the military use the NATO phonetic alphabet to communicate in coded or high-stakes situations. Many slang sayings have come from these codes and are colorfully used by service members in different situations. Some examples of slang from the NATO alphabet include:

Military Slang for Orders and Operations

Understanding your commanding officer’s orders can be a matter of life and death. That’s why many terms regarding orders and operations are in shorthand and have become slang among service members. Some of this slang includes:

Military slang is like a second language for soldiers. Slang can cover everyday actions, places, and experiences. Some examples of military slang for everyday life include:

Serving in the military requires discipline, bravery, and the utmost communication. That’s why military slang, expressions, and abbreviations are especially important to understand. An article that lists military acronyms can help you sort through some of the commonly confused abbreviations in the armed services.