The U.S. Navy has a long and colorful history, one that matches the naval slang terms sailors use with aplomb. The slang is genuinely funny, once you get someone to explain to you what all those words mean. It is often developed to say something colorful without getting into trouble with the brass. Navy slang communicates a very wry sense of humor with an arched eyebrow towards officers, protocol, and anyone with a supercilious attitude. 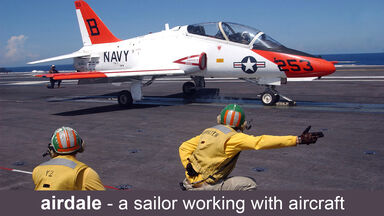 While it might not make sense to civilians, all naval terminology, jargon, and slang has a backstory. These number terms have clear roots.

This is the mocking description designated for officers who just graduated from the Officer Candidate School. Sailors also typically expand upon the description with sallies such as "90 day blunder" or "90 day miracle."

This is the general term for any time super early in the morning when it’s likely to still be dark. A sailor might say “o’dark hundred” for a time like 0200 or “o’dark thirty” for a time like 2:30 a.m.

Naval petty officers occasionally need a break from all the work of telling the regular enlisted men what to do. They take time out for a beer at the "Acey Deucey Club," a retreat for 1st and 2nd Class Petty Officers.

The rest of the sailors might be stuck watching television. For those overseas or on a ship, the television programs they're watching are programmed and sent to them by AFRTS (pronounced A-farts.) It stands for Armed Forces Radio and Television System.

Of course, when the sailors get paid, they take their money and go out on what they call "Amateur Night." That's what happens when men who are anxious for some R&R get too much money all at once and have a limited amount of time to spend it. (It's also called being broke the following morning.)

Any food that comes from a vending machine or any general junk food is called “geedunk.” The term also applies to the place where you buy the junk food. Its origins are uncertain.

Spending so much time on ships drives sailors to invent new words for common things.

A popular usage of naval slang is the name of a popular musical - Anchors Aweigh. "Aweigh" means that the anchor is no longer attached to the sea bottom, and the weight of the anchor is being held by the anchor chain. Notice it's "aweigh," and not "away."

This refers to raising the anchor on a ship. When it's "aweigh," it's no longer holding the ship in place, but even if the ship isn't moving, it's considered to be underway to its destination.

A submariner or a diver in his hard hat Navy gear is referred to as a "bubblehead" because of the appearance of the helmet on his head.

Cleaning duties are inevitable for young sailors. When you have to clean, you want this mop bucket that has attached wheels and a ringer.

If you’ve got to “go to the head,” you’re not on your way to talk to the head of a department. The head is slang for the bathroom.

When Navy reservists head out for a short trip on a ship, usually about three days, it’s called a kiddie cruise.

If you’ve ever been on a ship, you’ve probably noticed that the bottom portion of a watertight door’s frame sticks up from the floor. This is a knee-knocker and often causes shin injuries, especially for drunken sailors.

During "man overboard" drills, sailors use a dummy to throw into the sea that they nickname Oscar because the "o" flag ("Oscar" in the phonetic alphabet) is the flag hoisted when a sailor is overboard.

As with most close-quartered groups of people, sailors have created a whole set of nicknames to describe each other.

Naval slang is often used only by U.S. Navy members, but as these sailors adjust back to civilian life, they carry the language with them. If you love learning about the Navy, explore some common Navy acronyms and other naval sayings like "jury-rigged." If you're just interested in boating terminology, explore dozens of nautical and sailing abbreviations and terms.