What Is Quiet Firing? Why the Workplace Concept Isn’t All That New

No one enjoys getting fired. It can be a jarring experience that’s unpleasant for all parties involved, so it makes sense that you might want to keep it quiet. But what exactly is quiet firing? 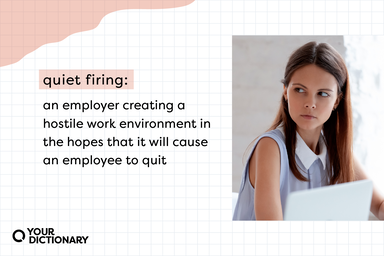 definition of "quiet firing" from the article
Advertisement

The Meaning of “Quiet Firing”

Much like quiet quitting, quiet firing is a bit of a misleading phrase. Your employer could be quiet firing while yelling and stomping their feet, and quiet firing doesn’t actually involve firing you.

Quiet firing involves an employer creating a hostile work environment in the hopes that it will cause an employee to quit (like, actually quit, not quiet quit). There are a lot of ways that employers could achieve this, but the main idea is providing employees with the absolute bare minimum and hoping those workers get the hint: They’re not wanted and should quit.

If that sounds toxic and dispiriting, you’re right!

Where Did “Quiet Firing” Come From?

The phrase quiet firing came as a direct response to quiet quitting. The exact origin is hard to pinpoint.

While the phrase might have entered the public vocabulary only recently, the concept isn’t new by any means. Quiet firing is essentially another way to say constructive dismissal. This is much more common in Canadian and U.K. labor laws.

In the U.S., constructive dismissal usually refers to any sort of involuntary resignation. Quiet firing gets closer to wrongful constructive discharge (which sounds gross, we know).

How To Use “Quiet Firing”

Quiet firing is generally used as a verb or a verb that acts as a noun (known as a gerund around these parts).

Can I Say “Quietly Firing”?

In general, quiet firing is treated as its own phrase, meaning that you wouldn’t normally turn quiet into its adverb form to modify firing. That helps to set it apart from an employer actually quietly firing you, whispering at you to empty your desk.

However, that’s not a rule set in stone, and quiet firing is still a fairly new term. That means you’ll occasionally see outlets use some form of quietly firing.

Quiet firing can come in all shapes and forms depending on the workplace, the industry, and the upper limits of your boss’ cruelty. That also means that it can be increasingly hard to spot, but quiet firing can look like:

Is Quiet Firing Good or Bad?

There’s really no good reason to give into quiet firing if you’re a boss or C-level exec. Aside from being a waste of your time and energy, you’re creating a workplace that is intentionally demoralizing (Surprise! That’s not helpful for anyone!).

Technically and unfortunately, quiet firing isn’t illegal. We know, that sounds ridiculous given that it’s basically workplace bullying and mental abuse, but as long as they are staying within the boundaries of general law, your contract, and the rules of the organization, your boss technically isn’t doing anything illegal. That gets even stickier considering your boss is the one making the rules.

Making a constructive dismissal claim typically falls entirely on an employee’s ability to prove that the employer was intentionally trying to force a resignation by creating intolerable work conditions.