Although rednecks and Southerners are not necessarily the same, redneck slang words are often considered Southern slang words. Learn the differences between the two, then review a long list of examples of redneck words. 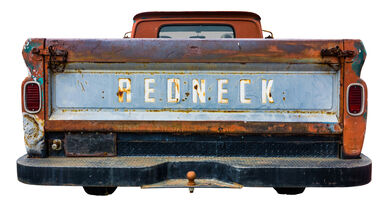 redneck slang word on back of truck
Advertisement

Plenty of Southern Americans fit this description, but by this definition, there are also rednecks in many areas inside and outside of the United States. However, with popular Southern comedians like Jeff Foxworthy and Bill Engvall making jokes about rednecks in the South, it seems that Southerner and redneck have become nearly synonymous.

The following words and phrases are Southern for sure, and some are considered more "rednecky" than others.