The Scoop on 'Spoopy': Where It Comes From & What It Means

There are two types of Halloween enthusiasts: those who construct realistic-looking graveyards and bloody haunted houses in their front yards, and those who prefer cute pumpkins and black kittens alongside adorable ghosts who say “Boo!” If the latter describes you best, you might prefer your Halloween a little on the spoopy side. 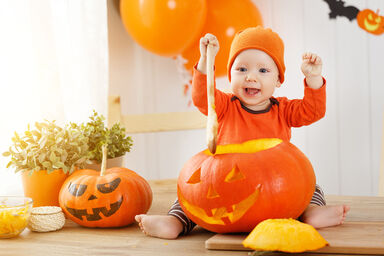 Baby cut pumpkin for Halloween in kitchen at home
Advertisement

Despite how it sounds, spoopy doesn’t have anything to do with poop. It’s an intentional misspelling of spooky that’s come to mean “adorably scary” or “trying to be scary but actually cute.” Based on an image of a Halloween decoration with a now-infamous typo, spoopy tends to trend around Halloween (for obvious reasons) and is perfect for those who prefer a G-rated celebration.

When trying to think of something spoopy, imagine Casper the Friendly Ghost or a preschool classroom decked out for Halloween. Zombies or corpses don’t appear in these spoopy settings; just doe-eyed ghouls and well-intentioned Jack-o'-Lanterns. You may also see:

Something spoopy might also be someone trying to be scary and failing. A zombie who got distracted from his search for brains by swinging on a playground swing may be considered spoopy, as well as a serial killer in a mask who wants to be BFFs with his victims instead of hunting them down.

If you want to describe a cutesy Halloween but spoopy isn’t quite doing it for you, try out these fun words instead (they look great on a pumpkin-themed party invite):

Trick or Treat, Without the Trick

Slang words emerge when the English language needs a little help describing something specific. For more slang that won’t spook you, check out: