Some Slang Words for Police

Bobby, Barney and Smokey the Bear are some slang words for police that are as old as the hills or at least date back to when the first cop pulled the first speeding motorist over for breaking the law. Nicknames for cops are one of the constants of all countries. The names themselves are interesting, but how the monikers for cops developed over the world is a tale itself. 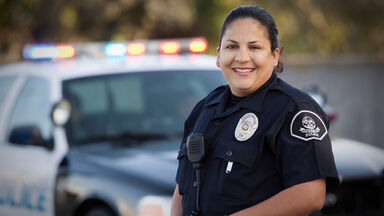 The United States has a rich history of slang nicknames for law enforcement personnel. Some are fun and some are complimentary, while others are rude and uncalled for. Of course, the police use jargon themselves.

The term barney is often used as a slang term to describe law enforcement officers who seem a bit inept, bumbling or overly excitable. This particular slang term for police is based on the character Barney Fife played by Don Knotts on the popular television series The Andy Griffith Show.

The slang term cop is commonly used for police officers. There are several stories about the origin of this word. Some say that this term can be traced back to the 18th century when policemen were called "coppers," probably due to the copper content in the early badges. The word was shortened to "cop" in the U.S. Another suggestion goes back even further, alleging that in Anglo Saxon times, the word cop actually meant to seize or take, and evolved into being used as slang for police due to the fact that their job involves arresting people.

The word dick is a long-time slang term for a detective. The word dick has been used in this way for centuries. Some people think that the term evolved as a nickname for detectives because 19th-century criminals used the word dick to indicate they were being watched, while others believe it's simply a shorter form of the word detective. While there is some debate about the origin of this slang word for police, it did not originate with the popular Dick Tracy comic strip. However, the use of the term as the name of the title character of the long-running fictional detective led to the term becoming even more popular as a slang word for police officers, particularly detectives.

One of the most famous television police shows from the 1960s was the original Hawaii Five-O, a detective program set in Hawaii. This program actually introduced a slang term for cops that is still used today: five-O. Steve McGarrett (played by actor Jack Lord) made famous the line directed at his lieutenant: "Book 'em, Danno!" Since then, it has become common to use "five-O" as a slang word for the police, with people who use the term warning fellow travelers of speed traps by saying, "Watch out for five-O.”

The word fuzz was commonly used as slang for police officers in the U.S. during the 1960s and 1970s. There are a number of stories about how this term may have originated. Some believe it began in England as a reference to the fuzzy hats worn by some police officers. Others believe it relates to the short and somewhat fuzzy haircuts new officers have upon graduation from the police academy. Some think it's just a funny way of abbreviating the phrase “the force,” in reference to the fact that officers are members of the police force.

The use of the word gumshoe as slang for a detective refers to the fact that detectives often have to operate in stealth mode as they seek to figure out what really happened in the commission of a crime. In the 19th century, gum rubber was used to make the bottoms of soft-soled shoes. These shoes had very soft soles, so people didn’t make much noise when walking in them. The term came to be used for sneaking around quietly and eventually came to be used to refer to detectives. A detective, of course, spends a lot of time pounding the proverbial pavement and often works undercover.

The word pig has been used as a derogatory term toward people others view as dirty or low down for centuries. During the civil unrest in the U.S. during the 1960s and 1970s, protesters and others who sought to speak out against the establishment started using the term to refer to law enforcement personnel who wanted to keep order. This term is used in many countries, often in a similar context. It’s typically used to express displeasure at the enforcement tactics used by law enforcement.

The term popo, sometimes written as po-po, is slang for law enforcement personnel that’s believed to have originated in the United States in the mid-1990s. It is considered street terminology. Some say it’s an abbreviation of the word police (po) or an acronym for police officers (PO) expressed by saying the acronym or abbreviation twice. This particular slang is more negative than it is descriptive and so is considered disrespectful.

The movie Smokey and the Bandit popularized the use of citizens band (CB) radios to warn other motorists of a police speed trap. The word smokey in the movie title is slang for police, though the movie had nothing to do with the origin of using this particular jargon term to refer to cops. This nickname for law enforcement officers developed long before the movie was made. It is a reference to the hats worn by state troopers and some other officers, which somewhat resemble that hat worn by Smokey the Bear, the popular fire prevention mascot of the U.S. Forest Service.

Using the man as slang originated in the free-spirited times of the 1960s and 1970s when the police and other authority figures, particularly those representing the government, were seen as a power group that wanted to suppress the activities of the times. This term is often used in a much broader sense than law enforcement alone, referring rather to those who have a position of power.

Brits have a variety of colorful (and sometimes not too flattering) nicknames for their police. Some of the British slang words for police are amusing.

London's “Bobbies on the Beat"

The familiar bobbies in Britain, with their tall rounded hats, high pitched whistles and billy clubs, are well known in the lore of fiction and movies. How did Britain's police acquire the nickname bobby? There are two theories:

Other British Nicknames for Police

Bobby isn’t the only nickname used for police officers in England. Other slang words for police in Britain include:

Britain isn't the only country outside of the U.S. with lovable (and some unlovable) nicknames for guardians of the law. Discover a few examples of Canadian slang used to refer to police.

The Royal Canadian Mounted Police are known worldwide for their days as horseback law enforcement. But Canadians have a nickname for them, too. The French term for Royal Canadian Mounted Police is Gendarmerie Royale du Canada or GRC for short. Jokesters use the GRC appellation to call the police the "Gravel Road Cops," an allusion to the fact that the mounted police patrol forests, mountains and rural areas away from cities.

The most commonly known nickname for members of the Royal Canadian Mounted Police is mountie. This term is short for “mounted” and refers to the fact that these officers patrolled on horseback historically. While they may not routinely ride horseback nowadays, they are still referred to as mounties.

In Ontario, Canada, the local gendarmes are referred to as the O Po Po. This is a play on the acronym for the Ontario Provincial Police. Sometimes the nickname for these law enforcement officers is shortened even more, with people referring to them simply as OPP.

Also in Ontario, the local constables are nicknamed PC. This is simply an abbreviation of the phrase “provincial constables.”

These are just a few of the many words considered slang for cops. Other nicknames for police have been used throughout history and more are likely to develop in the future. While slang is not proper English, it is part of the everyday vernacular. If you find these terms interesting, you’re sure to enjoy learning more about how slang affects the English language.