The Tea On 'What's the Tea': A Popular Slang Term for Gossip

Just sipping a nice warm (or cold) infused tea is enough to settle your nerves and let the stress of the day melt away. So why is the world’s favorite relaxing drink now synonymous with gossip and chaos? Well, here’s the tea. 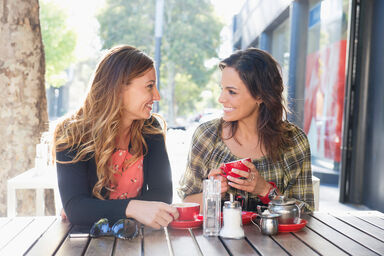 Unless you work in a tea shop or tea house, a person breathlessly asking “What’s the tea?” isn’t literally asking about tea. They’re asking about the latest gossip, or an update on old gossip, and they know you’ve got it. You can then “spill the tea” (reveal the gossip), especially if the “tea” is strong (a juicy secret; “weak tea” is an uninteresting secret).

Like the similar idiom “spill the beans” or even “let the cat out of the bag,” the phrase uses figurative language to both request more information and to describe having told a secret (“I spilled the tea.”)

The First Cup of Tea

Long before it became a meme, tea was a popular metaphor in the LGBTQIA+ community, particularly in black drag culture. Popularized by Lady Chablis in John Berendt’s Midnight in the Garden of Good and Evil and her autobiography Hiding My Candy: The Autobiography of the Grand Empress of Savannah, the term tea (or “T”) often stands for “truth.”

Credit for its recent appearance in popular culture, however, belongs to Lipton Tea and Kermit the Frog. In a popular TV commercial, Kermit sips a cup of tea as chaos unfolds around him. He laments, “Why can’t everyone just be more tea?”

The catchphrase “be more tea” didn’t stick, but the image of Kermit sipping tea certainly did. It morphed into the popular “but that’s none of my business” meme, which describes a dramatic situation that you observe over your cup of tea but don’t get involved in, beyond a lightly judgemental retort.

When Should You Spill the Tea?

So when’s a good time to spill the tea? If you ever find yourself in these situations, get out the teabags and honey:

And That’s the Tea

Teatime may be over, but for these additional memes, the next course is just beginning. Check out: