Weird Flex But OK: Origins of This Mocking Meme

“I’m not one of those workaholic jerks,” a friend proudly proclaims. “In fact, I’ve never even had a job!” Your friend may be making a point, but they’ve stumbled into a not-very-braggy brag, making them sound worse than intended. There’s only one thing to say in this situation: “Weird flex, but ok.” 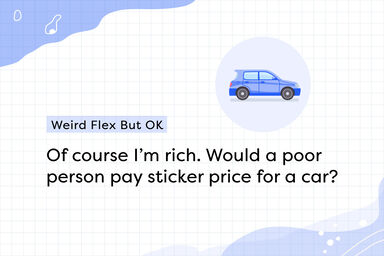 Weird Flex But Ok: Don’t Brag About That

Commonly spotted on social media and occasionally heard IRL, “weird flex but ok” is a sarcastic way to say “you think you’re bragging about yourself but you’re not, you’re actually embarrassing yourself, and you’re also embarrassing me a little bit.” If that’s not simple enough, let’s break it down:

Like most retort memes, “weird flex but ok” (sometimes “odd flex by ok”) often accompanies a demonstrative image or GIF from pop culture, typically of someone making a bemused or cringy expression. It’s a way to win an argument but also kind of lose at the same time, since the brag is technically true, but it doesn’t make the speaker look very good.

The Birth of the Weird Flex

The phrase was born in a land of harsh judgment, strident opinion and zero forgiveness, otherwise known as Twitter. Back in the early days of Twitter, you only had 140 characters to verbally eviscerate a person, so you had to choose your words wisely. Responding with “weird flex but ok” (note the all-lowercase to ensure extra condescension) costs only 17 characters, leaving plenty of space for disproving an argument or piling on more insults.

Since its early days, “weird flex but ok” is often shortened to the more popular “weird flex.” It’s an even more handy way to note “I’m not sure I would brag about that if I were you.”

So how can you tell if you’re making a weird flex? If your bragging style is similar to these examples, consider a different type of flex:

However, if you’re genuinely proud of yourself, flex your weird self. Society considers all kinds of weird things somehow not weird (hypebeasts are walking weird flexes, to be honest), so if you like the light your brag is casting on you, shine away.

Flexing Your Vocab Is Definitely Not Weird

Want a flex that always looks good? Improve your vocabulary with: