What About ‘Whataboutism’? Dissecting the Term

When you were a kid, there was no better comeback than “I know you are, but what am I?” (The eloquent “I’m rubber and you’re glue” is a closely related second place.) While some of us have moved past the classroom, others still revert to this type of retort, now called whataboutism — and if you’re not aware of it, you can get drawn into an argument that’s not even mature enough for kindergarten. 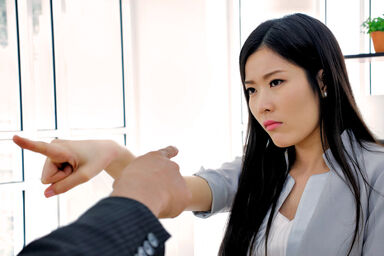 woman pointing finger at person pointing their finger back
Advertisement

The Art of Whataboutism

Whataboutism refers to turning an argument onto an opponent, thus avoiding their (probably valid) point. For example, if someone complains that you are stepping on their toes, and you say “But you stepped on my toes last week!” you’re ignoring their complaint and validating your behavior because they once did it in the past. However, by complaining about their past toe infraction, you’re agreeing that it’s an unacceptable behavior — but you’re entitled to do it because they did.

A Fallacy as Old as Time

While whataboutism is a relatively new term to describe this phenomenon, it’s not a new concept at all. It’s a logical fallacy known as the Tu Quoque (too-kwo-KWAY, meaning “You As Well”) fallacy, and it first appeared in print in John Cooke’s 1614 Greene’s Tu Quoque. That’s how long people have been excusing bad behavior with “But you did it first!”

This logical fallacy is a type of ad hominem attack that redirects an argument onto someone’s character rather than the substance of the argument itself. It’s also similar to the false analogy fallacy (equating two unlike points). Like most fallacies, you’re most likely to see it when someone's argument is empty.

Whataboutism In the Wild

What To Do About Whataboutism

It’s hard to recognize whataboutism in the moment, which is what the whatabouter is counting on. You’re so quick to defend yourself that you don’t notice how skillfully they have distracted you from the argument.

But you can ward off whataboutism by following these steps:

Chances are, they’ll try another fallacy to catch you off guard (“You only care about your toes! What about my feet’s right to crush your toes?”). But if you take a moment and gently steer the argument back, you’ll find that their feet will be off your toes momentarily.