What 'Cheugy' Means and Why You Want to Avoid Being It

You dance to new music on TikTok, you communicate exclusively in emoji, you talk about YouTubers like they’re your best friends, and your side part is a thing of the past. So why doesn’t Gen Z think you’re cool yet? The answer is clear: You’re a little cheugy. 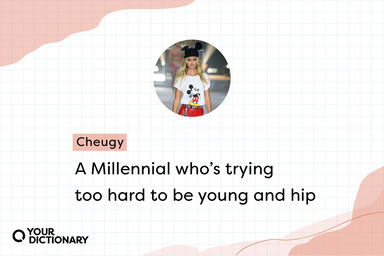 Cheugy: A Little Extra (But in a Bad Way)

Pronounced CHEW-ghee, the Gen Z term cheugy means “a Millennial who’s trying too hard to be young and hip.” It can describe anyone from a person rocking a fad from last season to a person older than Gen Z. If trendy people are on fleek, cheugy people are off fleek. (Now who’s cheugy?)

Zoomers Invented the Word, Not the Concept

Cheugy was invented in 2013 by then-teenager Gaby Rosson, who claimed that the word wasn’t meant to be mean — just descriptive. It became popular online years later, thanks to TikTok.

But even though Zoomers coined the term cheugy, they don’t own the concept of looking down on uncool older people. Millennials, Gen X and Baby Boomers used all sorts of terms (lame, out of touch, square, basic) to shatter an elder’s fragile delusion that they are still “with it.” Basically, young people want to kick older people out of the Youth Club by any means necessary — including dialectically.

So how can you tell if you’re cheugy? After all, isn’t all your old stuff from high school cool again? Your first clue that you’re a cheug is if someone actually called you cheugy (shudder). But if you haven’t had that misfortune, additional clues that you make the kids cringe are:

How To Stop Being Cheugy

The good news is, it’s easy to stop being cheugy: Just stop caring about it. If you care more about what a 20-something thinks than what you really like, you’re already being uncool. Just enjoy your Cinderella coffee mug and Harry Potter marathon, and stop trying to earn the respect of a generation that is trying to establish itself by being Not You. (After all, you did it to the Boomers first.)

Now That You Know It, Cheugy Is Cheugy

Calling someone cheugy has the unintended result of being kind of cheugy, especially if the person already knows what cheugy means. Learn more about Gen Z with these guides to modern slang (but don’t use them to try and be hip again):