What Does 666 Mean? Taking a Closer Look

“That’ll be $6.66,” says the cashier, and a shiver goes down your spine. Why do we find the number 666 so spooky and unlucky? There’s a reason — but depending on your interpretation, it may not be as compelling as the cool mathematical qualities of 666. 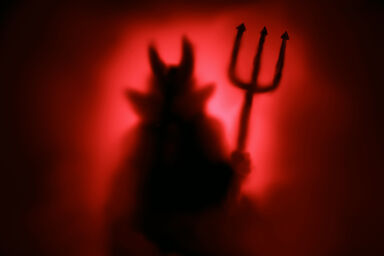 The Number of the Beast

The number 666 is known as the “number of the beast” in the New Testament of the Christian Bible. The Book of Revelation (13:15-18) states that 666 is the mark of a beast who will arrive in the End Times:

The second beast was given power to give breath to the image of the first beast, so that the image could speak and cause all who refused to worship the image to be killed. It also forced all people, great and small, rich and poor, free and slave, to receive a mark on their right hands or on their foreheads, so that they could not buy or sell unless they had the mark, which is the name of the beast or the number of its name.

This calls for wisdom. Let the person who has insight calculate the number of the beast, for it is the number of a man. That number is 666. (NIV)

666 is also known as the “false trinity” or the “unholy trinity” that consists of Satan, the Antichrist (a charismatic, powerful person) and the False Prophet (someone who claims to speak for God, but doesn’t). Basically, the Bible finds the number 666 to be bad news all around.

Is It Really, Though?

Taken in historical context, however, 666 has a different purpose. Some historians believe that the Book of Revelations, which was written by John the Elder around A.D. 96, and the symbols listed therein are not a warning of a real, snarling beast, but of the political control of the Roman Empire. In this interpretation, the Beast would be the Roman Emperor, whom Christians saw as a ruthless leader, and other symbols throughout the Book of Revelations would refer to other aspects of the Empire itself (including 666 as the Emperor’s “mark” on Roman coins).

If you support this interpretation, 666 is no longer a cursed, demonic number, but a symbol of political protest. But don’t paint it on your protest sign just yet — more often than not, people see the number as a bad omen.

Despite its religious and historical reputation, the number 666 has some uniquely interesting qualities. For one, its presence can create a beastly palindromic prime — a prime number that has 666 in the middle and reads the same forward and backward.

Other Devilish Appearances in Your Vocabulary

If 666 still gives you the heebie-jeebies, think about how many times you mention the devil on a daily basis. These devil-themed idioms are so common that you probably don’t even notice them anymore:

Math and Writing: A Match Made in Heaven

For more math and idiomatic resources, check out: