What Is Quiet Quitting? About the Hot-Button Workplace Phrase

In a world full of noise and excess hustle and bustle, quiet quitting sounds like the pleasant respite that we could all benefit from. It’s the buzz phrase that’s been making the rounds, but what is quiet quitting? 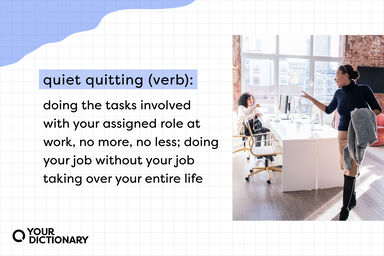 The Meaning of “Quiet Quitting”

Quiet quitting is a bit of a misleading phrase. It has nothing to do with noise. You could be quiet quitting while screaming at the top of your lungs (not recommended). It also doesn’t actually involve you quitting your job.

Quiet quitting refers to not overworking yourself or doing extra things that you won’t get compensated for; you’re not an underachiever but also not an overachiever.

It’s doing the tasks involved with your assigned role, no more, no less.

Simply put, it’s doing your job without your job taking over your entire life.

The quiet quitting movement comes at a time when exploitative labor, hustle culture, and work-life imbalances have come to a head, all of which have contributed to high rates of worker burnout.

Where Did “Quiet Quitting” Come From?

The phrase quiet quitting was initially coined in March 2022 in a tweet. However, the phrase reached true popularity in a TikTok from July 2022. The idea gained traction in the middle of August 2022.

The roots of quiet quitting go even farther back to at least April 2021 on Chinese social media. The Chinese trend tang ping, or “lying flat,” essentially means the same thing as quiet quitting: avoiding overwork, not making your job your only thing in life, and otherwise living a happy, healthy life.

How To Say “Quiet Quitting” IRL

Most people use quiet quitting as a verb or as a gerund (a precious verbing noun).

Can I Say “Quietly Quitting”?

Note that most people take quiet quitting as its own full phrase, even though grammatically you might want to turn quiet into an adverb that modifies quitting. Some publications have used this form of the phrase, but it's easy to confuse with people actually quietly resigning from their jobs.

What Is a “Quiet Quitter”?

Some have also taken to using quiet quitters to describe the people who are quiet quitting.

Is Quiet Quitting Good or Bad?

If you’re a C-level executive, don’t read this: For most people, quiet quitting is largely a good thing. It’s workers setting boundaries, understanding their labor power, prioritizing things outside of work, and maintaining a better work-life balance.

For CEOs, quiet quitting might not seem ideal, but workers who are happy and content will probably work quicker and harder. If it’s an actual problem, CEOs can also consider providing better compensation and benefits, reducing exploitative hours, and otherwise supporting workers.

Is the Phrase “Quiet Quitting” Good or Bad?

The phrase itself has come under some scrutiny and criticism, even among people in favor of labor rights. Using the word quitting assumes a sense of failure or that employees are in the wrong when, in reality, the concept largely involves just doing your job. Some people have turned to “quiet working” as an alternative phrase for the same thing.

The cool thing about language and slang is that it’s constantly evolving with us as we change how we live and work and play. That naturally means you’re going to run into a lot of phrases that are tied to quiet quitting in some way.

Something of a response to quiet quitting, “quiet firing” involves employers treating their employees poorly, hoping they will quit but not actually firing them outright.

Also known as the “Great Reshuffle” or the “Big Quit,” the “Great Resignation” is a trend of employees leaving their jobs. This began in early 2021 as a response to a consistent rise in the cost of living without an equal rise in wages to balance it out, safety concerns involving COVID-19, and ongoing job dissatisfaction.

While it’s most often associated with video game developers, “crunch culture” has affected different companies and industries. Crunch culture is the antithesis of and one reason for quiet quitting. It’s characterized by a perpetual “crunch time.” Think 100-hour work weeks (including weekends) with no overtime pay, for months on end.