What Is a Hypebeast and Could You Be One?

When you see a hypebeast, you know it. They’re not snarling, or growling, or even hairy or slobbery (unless that happens to be the fashion that week). In fact, hypebeasts aren’t beastly at all — they may just be the trendiest people you know. 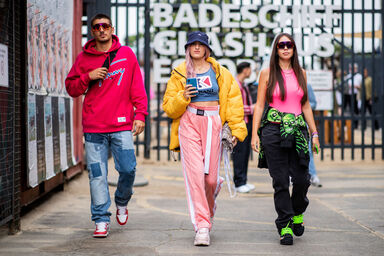 A hypebeast is a person who wants to be on the cutting edge of fashion and brand identity. Hypebeasts aren’t ahead of the trend or behind the trend; they’re directly on trend, sometimes forcefully so, wearing multiple designer brands from head to toe. Think sneakerhead (someone obsessed with high-end sneakers), but for their entire outfit.

Unlike a fashionista or a trend-setter who seems effortlessly chic, a hypebeast isn’t content basing their outfit around one high-end label or brand. In fact, they’re often covered in designer labels, leaving others to wonder if they’re paid to advertise the hottest brands out there.

Hypebeast and hipster are sometimes used interchangeably, but beyond their first letters and syllable counts, they couldn’t be more different. Hipsters like what others haven’t discovered yet, while hypebeasts only like something if everyone is talking about it. You’ll never find a hypebeast in a thrift store, just like you’d never find a hipster shopping at Louis Vuitton.

Are You a Hypebeast?

You probably already know that you’re a hypebeast, if you are one. But if you’re not sure, see how many of these statements ring true to you:

If you identify with more than a few of these, you may be a hypebeast. At least you know it (because everyone else probably already does).

It’s Both a Compliment and an Insult

Should you be offended if someone calls you a hypebeast? Maybe, maybe not, depending on how you feel about the label yourself (and chances are, you’re well-versed in analyzing labels). If you really wanted people to notice your labels, then congratulations — you’re a true hypebeast. But if you just want people to think that you’re stylish, maybe limit the flashy brands to one or two per outfit.

Hypebeasts Must Be Flexible

The tricky part of being a hypebeast is that fashion trends are always changing, so spending a lot of time and attention on high-end brands is always a short-term investment. However, hypebeasts love to chase the fad (and they hate being out of season), so they’ll find a way to clear up some extra closet space for next year’s hottest lewks.

Hype Up Some New Slang

Are there more slang words that have confused you in the past? Put those days behind you with these helpful guides: