What's an 'Edgelord' and Why Do You Never Want to Be One?

We’ve all known a few edgelords — they’re the ones who say shocking, often upsetting things they may not even believe just to provoke reactions in other people. And if you’ve never had the pleasure of engaging in conversation with an edgelord, spend a few minutes online and you’re bound to run into one or two. 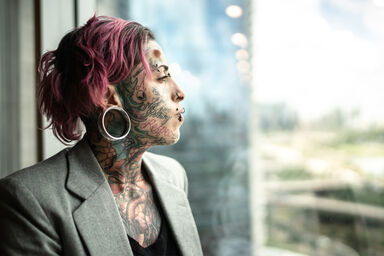 Edgelord: Too Cool to Care

An edgelord is someone with harsh opinions that they express in distasteful, offensive language to seem both edgy and aloof. As a 21st-century provocateur, an edgelord is especially attracted to taboo and controversial topics, which best showcase their would-be nihilism.

This person may dress in a provocative or shocking way, making them easy to spot. Unlike online trolls, who often are just normies trying to start trouble, edgelords set themselves apart from the norm in every way possible.

Even Edgier Than Edgy

Edgelord comes from the nickname edgy, which means “on the edge.” Edgelords don’t really care about where the edge is; in fact, they delight in pushing things way over the edge and pretending it’s not there. If you walk away from a conversation feeling like there were different opinions but some common ground, you’ve just talked to an edgy person, not an edgelord.

The Birth of Edgelord

Like many perfectly worded but otherwise inexplicable concepts, edgelord came from the internet. Specifically, its origin was in 4chan and similar boards where people would post dramatically offensive opinions just to watch the chaos that ensued. The term had a spike in 2014, but is still in use online today (though it’s still less popular than edgy).

Edgelords aren’t unique to the online age. In fact, they’re some of the most enduring characters in literary and entertainment history. We could consider these popular characters edgelords:

Do You Want to Be an Edgelord?

If you like attention and you’re prone to dark hyperbole, the role of edgelord sounds like a perfect fit. But don’t fill out that job application just yet — being an edgelord isn’t all its cracked up to be. Once you’ve got the reputation as an edgelord, people tend not to take you as seriously, so your actual opinions may get washed away with your over-the-top ones. Additionally, an edgelord’s intention is to alienate others with their statements and worldview, creating a schism that may be difficult to repair in the future.

Stay on the Edge of Modern Slang

For more tips and tricks to 21st century lingo, check out: