What's a 'Normie' and Does the Term Apply to You?

Everyone wants to be accepted by the group. It’s in our nature. So when someone calls you normie, a nickname for “normal,” that’s a compliment, right? Not exactly. 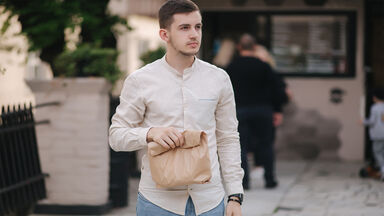 Are You a Normie?

Normie describes a person who dresses similar to the mainstream and doesn’t stand out in a crowd. They probably have conventional music taste, think in straightforward ways, prefer not to try restaurants with eclectic menus, and don’t have strong opinions on major issues. Does that sound like you? Then hi, normie.

Whether or not you’re offended by that assessment depends on the way someone says it. If they’re calling you a normie because you always wear white sneakers, plain jeans and a button-up shirt, they’re probably calling you “boring.” But if they say “I wish I could be a normie like you” in a wistful tone, they may admire the way you disappear into the populace.

A Product of the 80s

The word normal comes from the Latin normalis and has been around since the 16th century. The shortened normie isn’t quite as old, however. It appeared in the 1987 movie The Garbage Pail Kids Movie to describe “normal people” who hate the Garbage Pail Kids (and think they’re ugly). It increased in popularity with the spread of 4chan and Reddit and slowly became a pejorative term for people who only thought inside the box.

Right about now, you’re mentally analyzing your wardrobe and wondering what you should give away to avoid becoming a normie. But don’t stuff those dad shirts and mom jeans into a garbage bag just yet — normcore is actually a fashion statement. It’s defined as “stylized blandness” and trades the designer labels of the early 21st century with off-brand tee shirts and acid-washed everything.

Normcore is a way to stand out in a chic crowd, not blend into it. If that doesn’t make any sense, think of the grunge trend. Moving away from flashy 80s fashion, teenagers in the 90s purposefully wore ill-filling flannel shirts and baggy jeans. The point wasn’t to blend in — it was to stick out (and passive-aggressively shame the more materialistic fashionistas around you).

What Other Generations Call Normies

The name normie may be unique to this generation, but the concept definitely isn’t. If you don’t identify as a member of Gen Z, you may be more familiar with these terms that mean essentially the same thing:

Think back to when you were a teenager. Would you have liked someone to describe you in these ways? If not, then you probably shouldn’t embrace normie. (But if you don’t care, feel free to fly your normie flag.)

If You’re Not a Normie, What Are You?

Those who aren’t normies may describe themselves as free thinkers, free spirits, rebels, or individualists. Whatever everyone else is doing, they’d prefer doing something else. But don’t hang too much of your personality on a non-norminess — the trendy bell tolls for all of us eventually, and soon your kooky ways may be the next thing to copy.

Stay Up on Social Slang

You may be a normie, but you don’t have to talk like one. Learn the secrets of today’s lingo with: