What's a 'Self-Own' and Is It Something to Strive For?

Food delivery, house cleaning services, online dating — in the 21st century, you hardly have to do anything yourself if you don’t want to. But unfortunately for many of us, we still haven’t found a way to totally avoid embarrassing ourselves. Whether it’s tripping over our own shoelaces or accidentally insulting ourselves online, we are always just a moment away from total self-ownage. 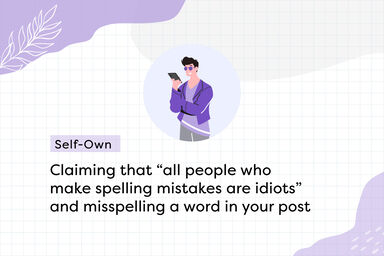 Self-Own: You Embarrassed Yourself

Remember the kids’ rhyme “I’m rubber and you’re glue, whatever you say bounces off me and sticks to you”? A self-own is just like that, except imagine that the rubber and glue are reversed, and the insult you’ve just tried to lob at someone ends up only insulting yourself. That’s a self-own: an accidental punch to your own face delivered by your own hand. It’s also known as the more popular self own (no hyphen, equal punch).

Self-own is primarily an online or texting term rather than a spoken one, probably because it’s a homophone for cell phone — say it out loud, you’ll hear it — and could be confusing. However, if someone complains about a $0.02 increase in a latte at the local coffee shop, you can feel free to mutter “Self-own” as they reveal themselves to be an utter tightwad.

Self-Owning Is About Ownage, Not Ownership

Even though own means “to possess something,” self-own doesn’t mean you’re self-possessed. A self-own refers to ownage, which is different from ownership — to own someone in this context means “to dominate or triumph over” them. This usage comes from a chess or video game context, but also in a verbal altercation (you’ve owned someone when you’ve really, truly insulted them). You may also see it spelled pwn, which is almost as popular as self own.

So that’s how you own (or pwn) someone. But when you self-own, you’re saving that nasty online commenter the trouble of insulting you, because you’ve inadvertently done it to yourself while trying to insult them. It’s also not the same as self-deprecating, which is when you’re purposely putting yourself down; a self-own is an unfortunate accident of your own (un)doing.

What does self-ownage look like in the wild? Some examples may include:

Own Your 21st-Century Vocabulary

Want to dominate the latest slang? Check out: