What's a Zoomer? A Look at the Informal Term for Gen Z

Could it be someone who zooms between traffic lanes at high speeds? Maybe a cute name for a dog who never walks but always runs? The possibilities for the definition of Zoomer are endless — but if you’re talking to someone born at the end of the 20th century, there’s probably only one meaning that fits. (Keep it in mind for the cute dog name, though.) 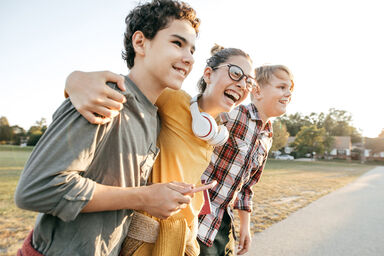 The nickname Zoomer refers to someone from Generation Z. Playing on the nickname for those born during the Baby Boom of the mid-20th century and the shortened version of “Generation X” before them, Zoomers were born anytime between 1996-2010.

They’re older than Generation Alpha, who was born after 2011, and are younger than:

While Generation Y eventually became known as Millennials, the colloquial term for Generation X is simply the shortened “Gen X” (“X” being the symbol of an unknown, undefinable variable, as Gen X was an unknown generation at the time). And Generation Z seems to be following in their footsteps: While Zoomers is fun to say, Gen Z is a more popular term than Zoomer.

The derisive comment “Ok, Boomer” is a Millennial's favorite way to tell a Baby Boomer that their opinion isn’t important. So can the same be said for “Ok, Zoomer?” Sure — but make sure you understand the implications of what you’re about to say.

The Zoomer Place in History

In addition, thanks to the presence of technology in Zoomers’ lives, they are innovative, well-informed and more educated than any generation before them. So be careful the next time you insult a Zoomer — they might just invent your next job.

Youth Isn’t Wasted on the Young

Want to know what the kids are saying without asking and sounding lame? Check out: