Spelling Difficult Words: Tips On How to Learn

It’s easy to memorize spelling rules such as "I before E except after C.” But what happens when you come across a sentence like "Neither of the foreign sovereigns wanted either of the feisty heifers for protein, and they seized the weird kaleidoscope from the counterfeit poltergeist!" Your nice neat spelling rule goes up in smoke. Fortunately, there are a few ways to spell difficult words that don’t rely on unreliable rules. 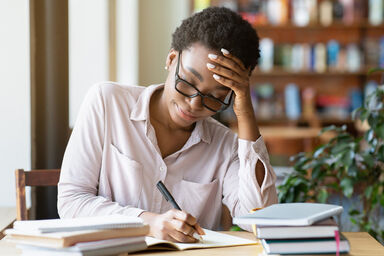 Separate the Word Into Chunks

The first step to take when trying to spell a difficult word is to chunk it out. Just like when you were learning to read as a student, sounding out the syllables of a long, hard-to-spell word can help you out.

Most words become much easier to spell when you break them into smaller chunks. For example, the word misanthropic may sound intimidating, but when you break it into chunks (MIS-AN-THROP-IC), it’s surprisingly easy to spell. You can do this verbally, or if you need to be discreet, you can write down the chunks on your paper.

Mastering Greek and Latin Root Words isn’t just a good vocabulary exercise — it can help with your spelling, as well. Unlike many English words, words with Greek and Latin roots and affixes are spelled consistently.

For example, in the word misanthropic, you can identify mis- as the prefix and -ic as the suffix. What’s left? The root word anthro-, meaning “person.”

Greek and Latin roots are one thing, but what about words with Spanish origin? Or words that we borrow from French? If you know the spelling rules of these languages, you’re unlikely to misspell a word that’s made its way into English. If you don’t know the spelling rules for the word’s language of origin, check those out before trying to spell the word in question.

One example may be the word maître d', the French word for a hotel or restaurant manager. If you only know English spelling rules, maître d’ is a nearly impossible word to spell correctly — but if you know French language basics, it would be easier for you to spell the word right the first time.

Everyone has their own set of tricky spelling words, and yours might be completely different from someone else’s. When you come across a word that you have a hard time spelling, jot it down in the notes section of your phone or in a writing journal. This trick is especially helpful if you’re constantly misspelling a word (or a name) that you use a lot.

In your free time, study these words and work on memorizing them. You may be surprised how little you need to reference these notes as your spelling progresses.

Use Colors to Memorize Difficult Words

There’s a reason why people with synesthesia tend to be good spellers: They associate letters with specific colors, so they only need to memorize the color sequence. For example, if they see the letter “e” as yellow and “i” as brown, they’ll never mix up the two in a word.

If none of that makes sense to you, you’re probably not a synesthete — but you can still borrow their tools. Write out a word that you have a hard time spelling and assign a color to each letter. You can trace over the letter with different colored markers, or you can use text colors to differentiate them, but visualizing the colors may make it easier for you to remember which letters belong in that word.

Champion spellers regularly use mnemonic training techniques before a spelling bee or competition. While some associate each letter of a word with another word, many associate a mental concept with a series of movements, almost like a dance, to hardwire the series of letters into the brain much more quickly and reliably than repetition alone.

Study (and Use) Commonly Misspelled Words

You’re not the only one who struggles with spelling difficult words. If you find yourself making the same spelling errors over and over, check out lists of commonly misspelled words and see which ones trip you up.

For more practice, try incorporating these words into your everyday writing. It’s difficult to misspell the words recommend or privilege if you use them all the time.

Even using these tools, memories can fade with new vocabulary. One of the best ways to master hard-to-spell words is reading a wide variety of materials, and as much as possible. The more times the eye sees words spelled correctly, the easier it is to spot mistakes. It becomes less a matter of following rules as much as gaining an intuition as to when a word simply “feels” wrong.

Don’t Let Spelling Get You Down

With these tools, spelling becomes a matter of habit, rather than a puzzle, and writers can concentrate more on the message they are trying to convey. Find more spelling tips with: