Invented Spelling and Its Role in the Learning Process

When you live in a world filled with LOLs and BRBs, it’s not surprising to see many words with invented spellings. The trouble is, no award-winning author actually thought “tho” was the correct way to spell “though.” So, does invented spelling fit anywhere into the learning process? The honest answer is yes. Invented spelling isn't something that can be totally avoided. In fact, it's a natural part of developing spelling skills. Take a look at how to incorporate this simple fact of life into your next spelling lesson. 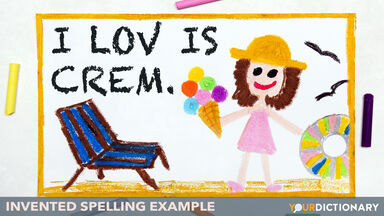 In 1975, linguist Charles Read conducted a study of preschoolers who were beginning to relate letter names to the sounds of the alphabet. He discovered that students commonly "invented" spellings for words in their daily vocabulary by rearranging letters to fit their perception of the rules of the English language.

Read concluded, "One sees clearly that different children chose the same phonetically motivated spellings to a degree that can hardly be explained as resulting from random choice or the influence of adults." A key takeaway from this study is that learning how to spell is much more than just memorizing words. It's a developmental process that goes far beyond just exploring the relationships between the symbols used to illustrate speech sounds. Thus, the process of invented spelling can play an important role in leading young learners to develop a deep, phonetically-based understanding of how to spell many words.

Many teachers consider invented spelling to be a developmentally appropriate step in the early stages of a child’s reading and writing. Proponents argue that invented spelling does not interfere with a child's ability to spell correctly in later years.

Invented spelling can be compared with the efforts a child makes when first learning to speak. A parent wouldn’t criticize a child's first attempts to reproduce the sounds of the verbal language. Accordingly, a child's efforts to master written communication skills should also be encouraged. After all, young learners have to start somewhere.

The Advantages of Invented Spelling

It's important to note that, from a technical standpoint, invented spelling is not an instructional technique. It’s merely a natural process that all children use as they’re beginning to write. There are advantages to incorporating invented spelling into the classroom. When monitored closely, it can offer a number of benefits for blossoming spellers.

The Disadvantages of Invented Spelling

In a classroom where invented spelling is allowed, a teacher wouldn’t deduct points from the student's grade for misspelled words in a composition. The potential disadvantages of allowing invented spelling are probably what you’d expect.

Learning to spell, just like learning to speak, is an ongoing process. There are a few important tips to keep in mind if you are a parent or teacher of a child in a school where invented spelling is encouraged.

As young learners start to move beyond invented spelling to mastering correct spelling, your approach to helping them build skills will need to change. Get ready to help your little learners build on their earliest spelling and writing skills. Start by learning how to teach sight words by grade level. Then, get ready to share fundamental spelling rules for everyone to know. Use fun spelling activities to help young learners build strong skills they'll be able to expand upon over time.