Are you ready to explore some of the words that are often misspelled? Hint: The word "misspell" is one of them. Below, you'll find a one-stop cure for all your spelling ills. The list highlights the correct spelling of 100 hard words to spell, along with brief tips on how to avoid making common spelling mistakes. Whether you're a student or are simply looking to compile a list of hard words for a spelling bee competition, this list of 100 difficult words to spell is a great resource to use. 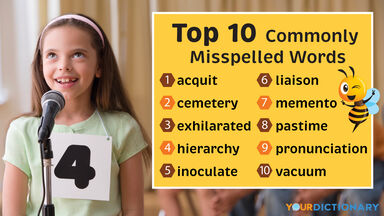 The first two letters of the alphabet have quite a few of the hardest words to spell. From acceptable to bellwether and several words in between, there are quite a few challenging words that start with "a" and "b." Apply the helpful tips below and follow key spelling rules to boost your ability to properly spell some of the toughest terms to get right.

Hard Words to Spell From C-D

Words that are challenging to spell don't stop with the first few letters of the alphabet. From calendar to dumbbell, the letters "c" and "d" pose some tough spelling challenges to consider.

Hard to Spell Words From E-H

The more you explore the alphabet, the more hard words to spell you'll find. From embarrass to humorous, plenty of words that start with letters between "e" and "h" are ever-so-difficult to spell properly.

Ignorance of correct spelling doesn't give you a license to turn in work that's rife with spelling mistakes. Instead, take the time to learn how to spell these challenging words throughout the alphabet, including ones that begin with the letters between "i" and "l."

There are even more often misspelled words that begin with the letters "m" through "o." Make an effort to own your responsibility for spelling these words correctly rather than being overly reliant on the spell check function on your computer or mobile device.

Hard Words to Spell From P-R

Yes, there are even more challenging spelling words that begin with the letters"p" through "r." When you start considering the most commonly misspelled words, you'll pretty soon realize that there are quite a few. After all, when it rains, it pours!

Even at the very end of the alphabet, there are sure some real zingers. Words that are difficult to spell persist all the way through the alphabet, to the very last letter.

The English language is full of linguistic pitfalls and exceptions to the rules when it comes to spelling. Working through the list above, including the helpful tips, will help you recover from your spelling woes and effectively improve your spelling skills. If you're ready to investigate another set of confusing words to spell, review YourDictionary's additional list that features 150 more commonly misspelled words for you to consider. When you're ready to soothe your aching head, be sure to check out this quick overview of words with two spellings.