Fundamental Spelling Rules for Everyone to Know

Spelling rules can take the mystery out of spelling by demonstrating patterns among seemingly unrelated words. Learning these rules will help you see connections between unfamiliar words as well as words you already know. Of course, there's no such thing as a hard-and-fast spelling rule. There are many exceptions because English borrows from many languages and is constantly changing and adopting new words. Still, it's important to master these basic spelling rules. They might not work every time, but they’ll apply often enough to help you succeed. 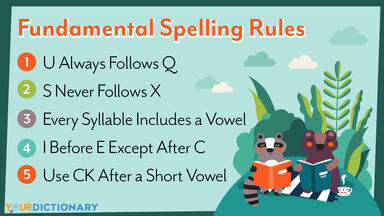 The letter "q" is almost always followed by "u," as in words like queen, earthquake and equity. When used in this way, the "u" is not considered to be a vowel. There are a few exceptions to this rule, but the words they apply to are not commonly used words most people are likely to encounter.

A number of words are pronounced with an /s/ sound after the letter "x," which often leads to spelling mistakes. The rule is that the letter "s" never follows "x" in a word. Instead, the letter "c" is used to achieve the /s/ sound in the word, as is the case with words like excise and excite.

3. Every Syllable Includes a Vowel

Every syllable of every word includes at least one vowel. Most one-syllable words with a short vowel sound need only one vowel. When you're spelling a word, say it out loud to identify the number of syllables. Then, look at what you've written to verify that each syllable has at least one vowel. If not, rethink the way you have spelled it. Some syllables may have a vowel diagraph, which is a pair of vowels that form a single sound.

4. I Before E Except After C (Most of the Time)

In many words that include an "i" and an "e" side-by-side, the "i" comes first. Words that illustrate this concept include niece, belief, cashier and achieve. It is generally true that "i" comes before "e," unless the vowel pair follows the letter "c" (such as with conceit, ceiling), or if the vowel pair makes a long /a/ sound, such as in neighbor or weigh. However, there are quite a few special-case exceptions, as with words like leisure, height and heist.

5. Use -ck After a Short Vowel

For words that end with a /k/ sound, you'll need to know when to use "ck" vs. just a "k" on its own. The rule is to use "ck" immediately after a short vowel, such as with duck, sick, or tick. Otherwise, the word should end with a "k," as with silk, balk, beak, or peak.

If the letters "f" or "l" fall at the end of a one-syllable word, they should usually be doubled. Examples include words like stiff and stall. The only exception is words that that end with a consonant blend, such as whirl or wharf. Do not double "f" or "l" with such terms.

The letter "s" is also usually doubled at the end of a single-syllable word, though there are more exceptions for "s" than for "f" and "l." Words like bliss, kiss and class are examples of terms that require two s's at the end.

There are quite a few exceptions. Get familiar with these exceptions, so you'll know whether to use one "s" or two at the end of a word.

8. Drop the Silent E Before Most Suffixes

Many words end with a silent "e." When adding a suffix that starts with a vowel, the silent "e" should usually be removed in American English. For example, the word race would become racing when adding -ing. When adding -ed to bake, the new word would be baked.

Get familiar with the exceptions so you can always correctly decide whether to drop the silent "e" or keep it.

9. Keep All Letters With a Vowel, Y Ending

When adding a suffix to a word that ends with a vowel and a "y," just add the suffix to the original word. You won't need to drop or change any letters. For example, jockey simply becomes jockeying or jockeyed, because the last two letters of the original word are a vowel followed by a "y."

With a vowel followed by a "y" at the end of a word, you can add any suffix without having to adjust the original term. The same is true for toy (toying, toyed) and journey (journeying, journeyed), as well as other terms that end with a vowel and "y" combination.

The word all has two l's at the end when written alone, but the prefix -al has only one "l." Words that begin with the prefix -al should not be spelled as if they are compound words that feature the full word "all." Words with -al as a prefix include almost, also, altogether, and always. As such, they correctly feature only one "l" in the first syllable.

The rule for adding prefixes to a word is much simpler than adding a suffix, from a spelling perspective. Generally, adding a prefix to a word does not change the correct spelling. So, adding de- to "activate" results in "deactivate." Similarly, and adding non- to "fiction" becomes "nonfiction."

12. Apostrophes Go Where Letters Are Removed

People sometimes shorten the word old to ol’. Have you ever seen someone write it as ‘ol? If so, that apostrophe was placed in error, because the apostrophe stands in place of the "d" that is missing from old.

There are no commonly used words that end with the letter "v" or "j." If you're spelling a word that ends with a /v/ sound, you can be sure that there's a silent "e" on the end, as with hive or jive. Words that end with a /j/ sound are typically spelled with -dge and the end, such as judge or edge. If you're writing a word that is used in ordinary communication, it won't end with a "v" or "j."

It’s tough to encompass all the twists and turns of the English language into one concise list. “Rules” is a tough word to use in this context, because grammar rules tend to shift, depending on the situation. Still, everyone needs to know the basic spelling rules. Want to do more to improve your spelling? Review lists of 100 commonly misspelled words. Then, explore another 150 often misspelled words! Within these lists, you’ll discover helpful tips and additional rules that’ll help you commit these tricky terms to memory. You'll be able to rise above over-reliance on autocorrect before you know it!