Have you ever gotten a paper back from a teacher with "passive" written in red ink? If so, you may be writing in passive voice without knowing it. Keep reading for quick active to passive voice converter tips and other ways to make voice change easy. 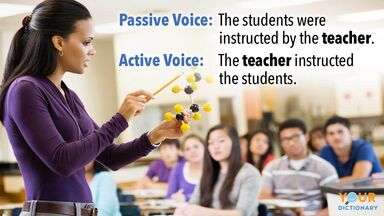 You may already know the difference between active and passive voice. But here's a refresher:

How to Change Voice from Passive to Active

If you can find the subject and verb in a sentence, you change the voice in your sentence. Let's use the following example to understand how to change passive voice to active voice: "The children were instructed by the teacher." Use these steps to work your sentence through a passive to active voice converter.

Step One: Find the Action of the Sentence

What action is happening in the sentence? Someone (the subject) is instructing someone else (the object). The past tense verb instructed is part of the verb phrase were instructed in this sentence.

Step Two: Find the Subject of the Sentence

In passive sentences, the subject may end up at the end of the sentence, or it may be missing altogether. The person instructing, the teacher, comes after the verb. If it were missing from the sentence, it would read "The children were instructed."

Step Three: Put the Subject Before the Verb

Once you've found the subject and the verb, put them together. So far, you've got "The teacher were instructed." But that doesn't sound right. Fix the verb tense to say "The teacher instructed."

Step Four: Put the Object Where It Belongs

Getting Rid of Extra Word(s)

Your new sentence is five words long, but your original sentence was seven words long. Where did those extra two words go?

Passive sentences often include extra words to force the subject to the back of the sentence. These words typically include all forms of the verb "to be," such as "was," "is," "have been," and "will be." Sentences that include the subject may also include the preposition "by." Both "were" and "by" were unnecessary words in the original sentence.

Try a new sentence with the same steps. For example: "The money has been stolen by the criminals."

Now your sentence is in active voice. Correct the following five sentences to practice changing passive to active voice (answers are below).

The best way to learn voice change rules is to see lots of examples. That includes examples of both active and passive voice. If you'd like more examples of both voices, download and print the handy reference guide below.

Be in Control With Active Voice

Feel like you're getting the hang of it? That's great! This is one of the most important rules for English writing. Before you close the book on the subject, learn more about how active voice adds impact to your writing so you're fully in control of your sentence structure. And if you're in need of active to passive converter help, check out those times when it's actually okay to use passive voice.