Commonly Confused Words (and How to Conquer Them)

It happens all the time. You're writing a paper or texting a friend and have to ask yourself, "Is it affect or effect? A while or awhile?" Sometimes, even the most seasoned writers have to stop and do a quick Google search to double-check themselves. If you take a moment to study commonly confused words, you might be able to compose your next paper or text without having to stop and chat with Google! 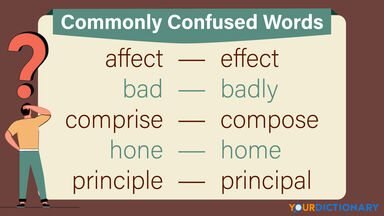 The words accept and except have different spellings and meanings. Avoid misusing these words by focusing on the prefix ex-, which means “out of” or “not.” If you’re describing something that’s not included, choose except.

These words are tricky because both affect and effect can act as either nouns or verbs. Try to master their pronunciations to choose the correct one. Affect starts with a short /a/ sound, while effect begins with a short /e/.

A Lot vs. Allot

When writers want to describe a lot of something, they sometimes use the verb allot instead. Even worse, they confuse a lot and alot — which isn’t a word at all. The easiest way to choose the correct word is to replace the word lot with the word little. If it works, you’re using a lot correctly. If you end up with “alittle,” you’ve made an error.

Both English teachers and professional magicians care about allusion vs. illusion. A quick trick to remember the difference is that the word allusion includes the word all — you reference all the other sources in your writing. Illusion contains the word ill, and too much magic might make you feel a bit ill!

Awhile vs. A While

The key to telling awhile and a while apart is to determine how they function. The adverb awhile modifies a verb, telling the reader how long I can stay. But the noun a while doesn’t modify anything; it acts as the object of the preposition in this example.

Many people choose the adverb badly because they’re trying to be grammatically correct. However, when used with transitive verbs such as feel, they should actually use the adjective bad. If you mix up the words and say “I feel badly,” you’re saying that you perform the action of feeling in a poor way.

It seems like the words comprise and compose are synonyms. After all, they’re both verbs that discuss how something is made up. But you should never use “comprised of” — it’s only “composed of.” Use comprise to stand in for its synonym contain.

Are crimes elicit or illicit? There’s an easy way to clear up the confusion between these words. Like the word illegal, illicit begins with the ill- prefix.

Hone your vocabulary skills by learning the difference between home and hone. The biggest mistake writers make is saying “honing in” when they mean “homing in.” If the preposition “in” follows the word, you use the verb home. Think of an object trying to return to its home!

Leery vs. Wary vs. Weary

Because leery and wary are synonyms, you can use one in place of the other. However, weary only sounds like the others — it doesn’t have the same meaning. If you’re using weary in a sentence, be sure that you’re describing a person’s exhaustion or level of tiredness.

The word pair lose and loose aren’t quite homophones, but they’re confused so often that it can be hard to tell the difference. Both words use the same double “o” sound, or short /u/ sound, making them easy to mix up. Think of a goose that’s gotten out of its pen at the farm — now that’s a “loose goose!”

Has the milk passed its expiration date, or is it past its expiration date? Both words are correct, depending on their function in a sentence. The easiest way to tell past and passed apart is to determine if you’re using a verb. If you are, use passed. If you’re not, use past.

The verbs precede and proceed don’t look very similar, but they sound quite alike. Remember your roots when choosing between these words. The prefix pre- means “before,” which should help you remember that something that precedes has come before.

Students and parents alike mix up principal and principle. Try the age-old trick for these words: the school principal is your pal! That should help you remember the adjective spelling as well since the principal is the principal administrator in a school.

Site vs. Sight vs. Cite

If you’ve ever wondered whether you should use site, sight or cite, you’re not alone. The best way to double-check these words is by using compound words that include them. “Campsight” and “campcite” look wrong, so a piece of land must be a campsite. The same goes for eyesight — you’d never write “eyesite” or “eyecite.”

Adding suffixes onto words can result in spelling errors as well as comprehension problems. The words stationary and stationery are a good example — changing one letter in the suffix makes them completely different words. Think of the word stay when remembering the difference between these words. Stationary has an “a,” just like stay — and it stays in place.

Some dialects pronounce than and then quite differently, while others make them sound the same. Either way, you need to choose the correct spelling! The word compare can help you because when you compare, you use than (they both use the letter “a”).

Believe it or not, this isn't a comprehensive list of all the commonly confused words in the English language. But it's a healthy start. If you commit some of these pairs (and triplets) to memory, you'll be ahead of the crowd.