Everyone at work occasionally has a bad day, or even a string of bad days; that's exactly the moment you can do a wonderful thing by offering encouraging words for co-workers. Sometimes your offer of support, your positive words, and your expression of sympathy may be just the thing they need to hear to keep from plummeting into the depths of despair. 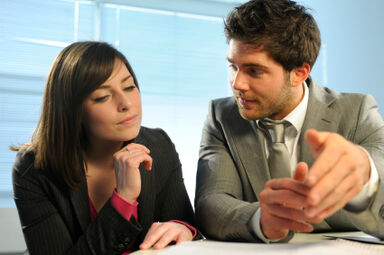 It happens every so often. A co-worker has the bad luck to make a mistake, or to be singled out as the one who's going to take the fall for a group effort that didn't go over with management.

Some co-workers fear being around the victim, as if that taint of failure might slosh over onto them. That's bad form, but worse, it has a domino effect on everyone in the immediate group.

Don't turn your back on a fellow employee just because they made a mistake. Remember, you're all on the same team, and while it might be the next cubicle tenant's fault this week, it could be your turn to be singled out next week. You'll want someone to give you the kind of support in the near future that you give to your fellow employee today. No matter the circumstances, there are always positive things to say about a coworker.

Karma is a definite phenomenon in the workplace. Be there for your co-workers. They'll be there for you when it's your turn to need a sympathetic ear. Here's some sample wording to try out:

You know the routine. You work hard on a project, positive it's going well, and you'll get recognition for a job well done. Something happens, and it's not good. You miss a deadline, your boss got bashed by his boss, and as they say, manure runs downhill. This time, though, it's a co-worker who has gotten the booby prize, and she's taking it hard.

What can you say, particularly if you know her work really wasn't the best she could've done? Be honest - but not blunt. You won't be doing her a favor by adding to the general piling-on she's experiencing. Point out something good she did, like her dedication, her creativity, or her unfailing work ethic. In other words, before you go in with the vinegar, add a little honey to it to make it more palatable.

Fellow employees will take a difficult truth a little more easily if they think it's coming from someone interested in their welfare. Your co-worker may be competition for you, in some sense, but not everything in the world is about winning.

Sometimes it's just about being human. Give her your honest appraisal, but don't forget to tell her what she's doing right. No one becomes horrible overnight. Don't add to her low self-esteem by beating her up. Guaranteed she's probably doing a good job of that herself. What she could use, or what everyone in your group could do with, is some encouraging words from those around her.

You will all profit by the truth, leavened with some kindness and consideration. Here are some ways to offer gentle compliments for coworkers:

It's five simple words. "I'm so grateful for you." But, that one simple line may mean the world to someone. Oftentimes, we feel like we're doing the right thing, helping others out, and it all goes unnoticed. Perhaps that's okay. Humility is the essence of life.

But, a few kind words that demonstrate your appreciation will not only make them feel good, but also establish a nice rapport between you two. Here are some top compliments for coworkers and words of appreciation:

Not every source of pain or hurt for an employee is an issue with their job. Sometimes the trials and travails of everyday life just slosh over into the work sphere.

It's difficult to keep them separate, especially if the personal issue is a huge one: divorce, illness, death, problems with children or parents. They all add up and put a strain on the best of employees.

What should you say? Well, you may not want to cross over personal boundaries, particularly if the relationship you have with your co-worker has always been a purely professional one. You may like and respect one another, but that doesn't mean you necessarily are friends on your own time.

Even so, if the issue is one that's common knowledge, such as a death in the family, give your best and most heartfelt words of condolence to your co-worker. He won't be sorry to hear it. It's always a good thing to know that even the people you work with are human enough to care about the painful things that happen in private.

There is no such thing as being too kind or considerate of the people you work with. That kind of empathy can only bring your group closer together. Plain old human decency only greases the wheels of interaction, and makes it easier for everyone to get along, in private or public life.

The right encouraging words for co-workers, offered in a timely and concerned manner, can make the job go better for everyone. Here's a small sampling of ideas:

"This Place Won't Be the Same."

"This place won't be the same without you," is a nice way to let someone know they'll be missed. If someone you've loved working alongside is leaving, remember to stay positive. Although you'll be sad to see them go, focus on their success. If they're leaving, they must've come upon an opportunity that's better in one way or another. Here are some encouraging words to send them off with:

Be the Light in the Room

Wouldn't it be lovely if you were considered the workplace encourager? You don't have to lay it on thick. You just need to be a steady source of encouragement and joy. Hopefully some of these suggestions will help you achieve that goal.

If you're looking for general sources of inspiration, come on over and check out our quotes page. You'll find inspiration quotes for every occasion under the sun. Then, move on over to our meaningful quotes about life. After all, the more we focus on the positive, the more we bring these things to light.