How to Form the Possessive Case for Correct Grammar

Many teachers are tasked with the challenge of teaching the usage of possessives grammar to students worldwide. Possessive forms in English grammar are governed by a set of rules. Learn the rules for making singular, plural, and compound possessive case in a sentence. 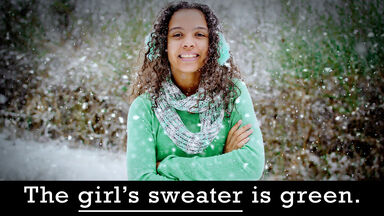 An apostrophe is almost always used with a singular noun in order to indicate possession of an item or items by an individual. For example, use an apostrophe to indicate ownership with the following:

In the event that the last name of an individual ends in the letter "s", you could still use the apostrophe "s" to indicate ownership. So, if the person's last name is Watkins then add an apostrophe and the letter "s" to show ownership - Watkins's. However, it is also correct to just use just an apostrophe in these instances - Watkins’. Check out some examples.

For a plural possessive, you need to make a noun plural and use an apostrophe. For example, for the word girls, add an apostrophe at the end of the word "girls" - girls'. Do the same thing for possessive names ending in “s" like "Jones" (Jones') or "Hastings" (Hastings') as well.

For nouns with an irregular plural form like children, add an apostrophe then “s”. So, if you are talking about two women, then you would show possession by simply adding an apostrophe and the letter "s". For example:

When it comes to possessive grammar for compound nouns, there are a few ways this is going to be handled, depending on if the compound nouns are working “together” or “separately”. For example, when you say “Michele and Isabella’s”, it means they’re together in ownership. On the other hand, if you say “Michele’s and Isabella’s”, then their ownership is separate. Let’s look at some examples.

No Apostrophe for Possessive Pronouns

Never use an apostrophe with plural possessive pronouns like his, hers, its, yours, or theirs. These pronouns already show possession so it is not necessary.

In the United States, a number of holidays use the possessive case. While many of the rules aren’t hard and fast for holiday’s, check out these examples for possessives in holidays.

Here are some holidays using the singular possessive.

Now check out a few examples of plural possessive holidays.

The key to teaching possessives is to make sure it is clear and fun.

Having examples for possessive grammar can be really helpful. The main thing to remember when dealing with singular possessives is you usually end up using an apostrophe and the letter "s". Plural possessives will just add an apostrophe after the “s” unless, of course, they are irregular. Names that end in “s” can get a little tricky but mostly come down to your preference.

Now that you have a handle on possessive grammar, try possessive nouns. Practice makes perfect when it comes to John’s education!