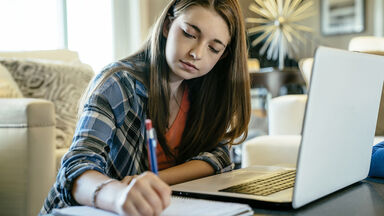 What Does Figurative Language Mean?

Figurative language adds color, touch, and feelings to your writing. It takes the reader to a place where they can use all their senses to understand the work. In its most basic definition, figurative language is the use of different literary devices to make writing more impactful or effective.

Take similes and metaphors - two of the most popular forms of figurative language. Similes make comparisons using the words "like" or "as." For example:

You can see how these examples of figurative language give literal meanings a bit of a boost. Instead of using a simile, we could have just said, "He was fierce." Isn't that boring, though? Now, we have an image of a man dominating the room like a lion on the savannah. The same for our zen man. We could've said, "He was very calm." Instead, we're able to conjure up an image of the serene and wise Buddha. Fun, right? Let's get out our paintbrushes and take a closer look.

While figurative language is common in literature and poetry as it uses exaggerations or alterations to make a particular linguistic point, it's also used in other forms of writing. Let's explore different variations to see what you'd like to use in your next writing piece.

Let's dig a little deeper. Figurative language may also include unusual constructions or word combinations to provide a new perspective. Here are some examples:

Figurative language provides endless depth to our writing. There are so many ways to punch our points and invite readers to join us on a literary adventure. When used carefully, figurative language even has a place in professional spheres. It can draw interesting comparisons between two things, promoting consideration for your cause. So, go ahead and dust off your metaphorical paintbrush as you explore personification for kids. Who knows where it will take you!