Did you know he and she are the only gender-specific pronouns in the English language? While it may be obvious to most native English speakers that he is masculine and refers to a male and she is feminine and refers to a female, non-native English speakers may confuse the two. And what happens when someone wants to remain gender-neutral? Here are a few grammar rules for they, he or she usage that will help you stay the course and achieve your writing goals. 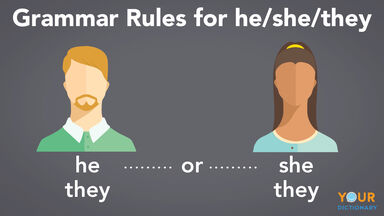 Basic Rules for Using He and She

Many languages use gender-specific pronouns to refer to a variety of objects that are obviously without gender. Many of the Romance languages, for instance, refer to objects as he or she, instead of the non-specific word it. Every object, animate and inanimate, is therefore ascribed a gender. This can be difficult for English speakers learning a foreign language, like French or Spanish, because with every new vocabulary word comes a corresponding pronoun.

Interestingly, though, the English language employs the word it as a gender-neutral term to refer to inanimate objects or animate objects that are not human beings. Additionally, you can use the gender-neutral they as a singular pronoun for individuals. Learn more about each pronoun and how to use it in a sentence.

In English, he, she and they are known as subject pronouns. They’re used only when referring to people and, in some cases, animals such as pets (although such usage isn’t technically correct). These pronouns function in a number of ways.

He, she and they may be used when the pronoun is the subject of the sentence.

The subject can be renamed in a sentence so that the individual speaking or writing need not repeat the name over and over.

Should We Use He, She or They?

For years, if the gender of an individual referred to in a sentence is unknown, “he” would be used as the generic pronoun.

It was understood, by both the police officer and any listeners, that “he” could refer to either a woman or a man. To be inclusive, this did morph to the use of the clunky "he/she." However, he/she is limiting since it does not account for non-binary individuals.

As culture changes, so does the language, and many believe that the exclusive use of he or he/she for a person of unknown gender is outdated. Therefore, the singular they is the preferred pronoun. In specific sentences, you can also use one or a descriptor.

The Associated Press Settles the Matter

While it may seem awkward to use the singular they, the Associated Press weighed in on the matter in March 2017. It announced that The AP Stylebook will accept the plural “they, them, and their” to refer to a singular antecedent when the alternative wording is awkward or clumsy. It seems the authorities on the matter knew writers were continually put in a tough spot when they wanted to remain gender-neutral and came to the rescue. Many other writing styles like MLA and APA have also followed suit.

The Grammar Rules for Using They, He or She

Understanding how and when to use he, she or they can be interesting. If you’d like to continue this multi-faceted study into the world of pronouns, come on over and join the fun. You can also try your pronoun grammar knowledge out through pronoun activities and a pronoun quiz. Additionally, find out more about pronoun agreement through this interesting article. And if you are looking for some fun, check out pronoun games.