How Do You Spell Hanukkah Correctly? 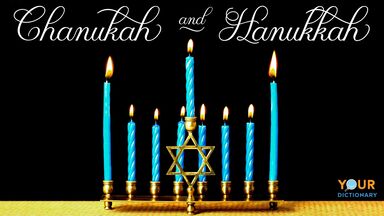 spelling for chanukah and hanukkah
Advertisement

Is the Correct Spelling Chanukah or Hanukkah?

The two most commonly seen English spellings for the name of the Festival of Lights, as observed in the Jewish faith, are Chanukah and Hanukkah. These options are both considered correct spellings in the English language for the Hebrew word חֲנוּכָּה. One has been around longer and the other is used more commonly in English-speaking countries.

The pronunciation is the same for both spellings. It can be represented phonetically as [KHänəkə] or [χanuˈka]. Even though these phonetic spellings appear quite different, they sound the same when spoken.

Hanukkah is a Jewish observance, so it is a Hebrew word. The Hebrew language is distinct, with its own letters that do not directly translate to the letters of the Latin alphabet (also known as the Roman alphabet), which is used in English. When translating words from one language to another that uses an entirely different alphabet, there isn’t always a clearly-defined correct answer for how the word should be spelled in the target language.

Why Are There Multiple Spellings of Hanukkah?

The process of representing meaning using letters that don’t exist in another language is called transliteration. Because Hebrew and English use different alphabets and Hanukkah is a Hebrew word, expressing it in English goes beyond translation to transliteration. This poses some unique challenges.

Since the word Chanukah has been in use longer and is still the preferred choice in traditional faith-based settings, it’s likely that early transliterations utilized the spelling that most closely aligned the Hebrew and Latin alphabets (Chanukah). It is likely that pronunciation difficulties for native English speakers led to the evolution of an alternate spelling (Hanukkah).

Basically, both spellings (Hanukkah and Chanukah) are easy for English speakers to mispronounce. Saying the word correctly means using a sound not commonly used in the English language [χ] or [KH]. English speakers often mispronounce the word by using a soft “h” sound, which is at least closer to how the word should be said than if they were to use a traditional English language “ch” sound. This may be how and why Hanukkah has become more common, but no one knows for sure. This is one of the many examples of how language style and usage evolves.

Ways to Spell Hanukkah in Other Languages

More Than One Correct Spelling of Hanukkah

Now that you are aware that there is more than one way to spell Hanukkah, you are armed with a few different ways to spell the term correctly. Assuming you’re in an English-speaking country, consider the preferences of the person with whom you are communicating when deciding which spelling to use.

If you’re interacting with someone who practices traditional Jewish customs and observances, perhaps Chanukah would be better received than Hanukkah. Use your best judgement. Review vernacular language examples for more information on how audience and identity preferences can impact language usage. Keep in mind that there are also a number of appropriate Hanukkah greetings. Make sure you know how to say Happy Hanukkah using various greetings and wishes.