Is It Converse or Conversate? Hint: They’re Both Real Words

When you receive compensation, you’ve been compensated. So when you engage in conversation, have you conversated? Grammar enthusiasts, English teachers and avid readers alike will all answer “no” — but conversate is technically correct (albeit nonstandard) vocabulary. 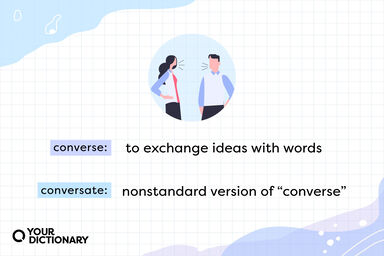 The noun conversation comes from the Latin conversare, meaning “to turn about.” It referred to the act of talking (“turning about” ideas) in the late 16th century, shortly before the verb converse (which also means “the opposite way”) became synonymous with “talk informally.” Converse is more popular than conversate, and it’s also the preferable choice in writing.

Often used as a verb form of conversation, conversate appears as a less formal version of converse. Some may wrinkle their nose at the word, but despite their misgivings, conversate is a real word. It’s even hundreds of years old, with its first written appearance in the mid-19th century.

Where Did ‘Conversate’ Come From?

Like much of current English slang, conversate originated in African-American vernacular. Today the word is recognized in African American English (AAE) and African American Vernacular English (AAVE) with the meaning “to talk” or “to have a conversation.” Conversate appears in many dictionaries as a synonym for converse, though many writers prefer not to use it because it’s considered a nonstandard verb.

When To Use ‘Conversate’

Even though conversate is a real word, you’re less likely to find it in formal writing and speech than in casual conversation and texts. Times when conversate is acceptable may include:

While nonstandard terms, including dialect, can be appropriate in spoken conversation and some types of writing, some situations call for standard language usage. In situations where proper word usage is important (such as academic or professional writing), opt for converse (verb) or have a conversation rather than conversate.

Using ‘Conversate’ in a Sentence

Examples of conversate in casual writing and conversation include:

Conversate may be considered nonstandard, but so are ain’t, c’mon and yup — and chances are, those words have appeared in your texts or favorite novels. If you still don’t like conversate, just choose converse instead. (And if that sounds too formal, there’s always talk, speak, chat, banter, discuss, and many more synonyms to choose from).